We left off leaving whc03 grady in a Montana late-breaking sunset:

It was chilly up wherever I was, like long-ago Florida January 2nd chilly! You know, 50*s. In the morning I had to get a First-Gas-Station-I-See cup of coffee. It was 7:00AM Pick-Ups Towing Trailers Rush Hour at the local Exxon:

Drove past Anaconda where I do believe Melissa was inspired to Do Something About It.

Drove into the very spot where the BobD alternator pulley fiasco occurred in 2014:

Now, however, there is a mountain of gravel. I could have climbed up there and waved my tatty tank-top at the passing cars on I-90:

Sure, read about it. Mitch and Melissa and mtcamper were all in it:

Stopped at my namesake town to get some gas. "DO YOU KNOW WHO I AM?" I yelled at the gas pump when it refused to honor my card. ATT Universal shuts your cards down when they are bored and make you call them to tell them for the 2,703rd time, "I am traveling! THAT's why I have three gas purchases in three different states in three hours!!"
"State your name."
"Colin Kellogg!"
"And where are you currently?"
"Kellogg!"
"I got that, SIR ...."
"Kellogg! I am in Kellogg! Kellogg, Idaho!"
"Sir, tell me your first name again."

In Post Falls, my first 30 minute dose of sunlight NOT at a customer's house was devoted to cleaning the car:

Re-adhered the kick panel vinyl which had shrunk but good, so I also painted the exposed masonite with plastic paint to hide, to mask, to avoid, the effects of aging ... : )

Drove to the outskirts of Spokane and camped in a quiet cul-de-sac where the street lights had not been wired up yet. Next morning, I did not even make it to a coffee shop to update you all. I saw a crack in my passenger door ... and it had rust under it. Parked in a below-grade loading dock and went to work:

Fred The Oversprayer had BONDO'D the sill at the outer scraper and painted a dam, just like the windshield channel!

Look at how nice the other side of the channel looks! I had to carefully grind down the bondo/primer/topcoat dam:

Finally got a chance to get rid of the yellow paint stuck on the edges of the outer scraper trim:

The original rubber scrapers were FINE:

Two coats of rust-catalyzing primer plus three of grey primer:

That is grease in the rectangular cut-outs, to help put the infernal outer scraper back in:

But I must admit, it really does feel better to take care of my poor car that I neglect terribly and drive in the rain all over:

I knew you were getting close. Your schedule says you’re on a virtual vacation until your next appt!
Enjoy it. See you Tuesday.
Top

Welcome to, and bye from, Idaho!

It’s true, under threat of bodily harm, this is as close as the public can get a Volkswagen Bus to The Stack in Anaconda, Montana. 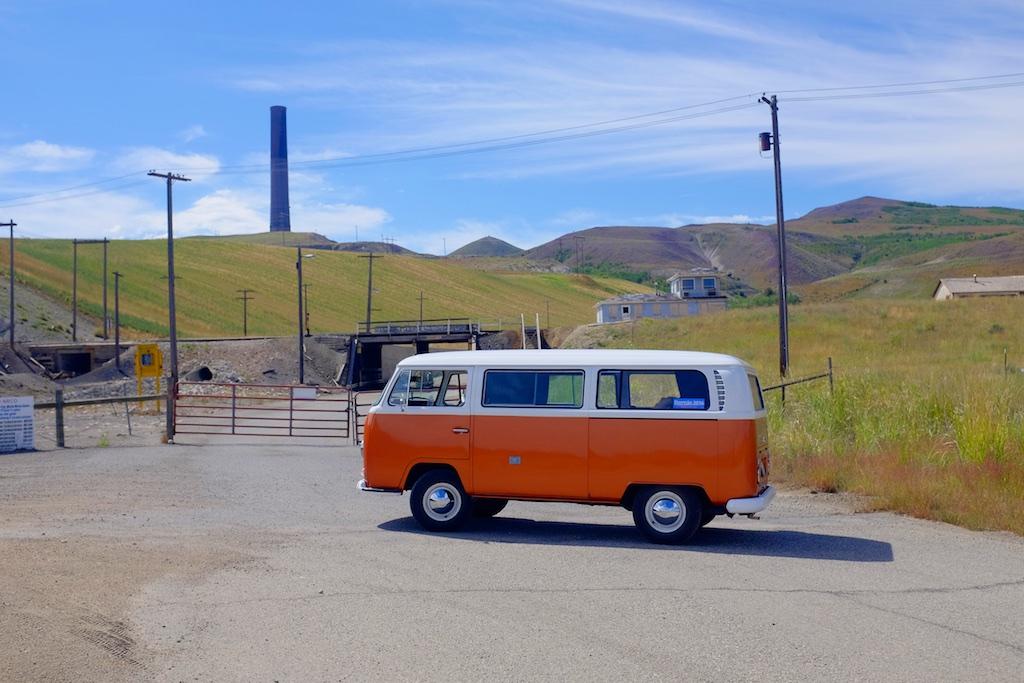 There’s the Kellog in western Oregon, and the one in western Washington, do you know of any others?

It’s true, under threat of bodily harm, this is as close as the public can get a Volkswagen Bus to The Stack in Anaconda, Montana.

There’s the Kellog in western Oregon, and the one in western Washington, do you know of any others?

Speaking of screwing up my rear window. It is has been leaking. The rubber has contracted. I have done this before, on the Squareback and on the BobD. I removed their rear windows and glued in a 22ga speaker wire to the glass, then installed them, no more leaks. Easy right?

Not this time! Oh no no no no ...
Removed the curtains and the dearly departed flies and gnats:

Soaped up the surround and disturbed the rubber to let dishwashing liquid enter the pinchweld groove:

Pressed glass up hard and tucked the seal behind the pinchweld. Removed the rear glass and seal:

Sure is going smoothly! I'm even documentin' it:

Look at how pretty! how pretty and clean! that seal is!

Even came up with an elegant NEW! solution to getting the seal to press more firmly in the opening!

Mixed up a new batch of paint as close as I could get it and painted the opening and a few touch-ups along the sides and rear of the car, because I am thorough and careful, folks!

Got my d@#! wire to butt perfectly and sealed it up in the electrical tape border around the glass:

Look at the #^!@ing seal just sitting there looking all nice, stupid @$$ seal!
I WAITED FOR THE PAINT TO DRY! THIS WAS GOING TO BE NICE!

BUT NOOO! No can do! No, when I put the seal and the glass in the tailgate opening with dishwashing liquid, the seal, the infernal seal, the seal merely ripped as I pulled the cord! OK! I got this. Took out the glass and used a thinner cord. Stuck it back in the opening with new dishwashing liquid. Gently tried to pull the new cord carefully. But NOOOO! It kept hitting the rip and stopping. So I went the other direction, we'll leave the injured place alone and meet up on the backside. But NOOOO! A NEW BREAK! Oh my god no. Took out the glass AGAIN. Tore off the taped perimeter expansion wire, can't apply undue stress to this OBVIOUSLY PETRIFIED RUBBER! Stuck the rubber and glass back in the opening. But NOOOO $*@&#@!, we have nowhere to start a rope pull! The broken areas are at the sides and the rope just digs in.

It gets worse.
I am looking at a darkening horizon and even checked my weather site to see hideous crawly rain showers sprinkling all around me and this window is so not in.
Can't use rope! Can't use wire! In hopeless despair, I vise-gripped a 2 1/2mm allen wrench and dug that thing into the rubber and carved the damn seal over the damn pinchweld with a rain of yellow paint and grey primer flakes as it hit spotweld obstruction and imperfections in the opening. My back was gone, my fingers were gone, the destructiveness of this window reinstallation with NO advantage whatsoever in having done it at all was heart-sickening.

So remember kids, there is no use in reusing a forty two year-old seal when they are readily available.
Colin

("Uh boss, did you just say I had to take 'anger management' classes? Are you SERIOUS? That damn stove had it coming, and the microwave? Don't even get me started ...")

Colin, as frustrating as this was for you, it is an affirming thing for many of us to see that sometimes even the experts, the masters, the standard bearers, have to resort to clumsy, hamfisted repairs in the heat (or should I say damp) of the moment.

Looking forward to your documentation of the successful redo with a new seal.
Don

"When we let our compassion go, we let go of whatever claim we have to the divine." - Bruce Springsteen
Top

Colin, as frustrating as this was for you, it is an affirming thing for many of us to see that sometimes even the experts, the masters, the standard bearers, have to resort to clumsy, hamfisted repairs in the heat (or should I say damp) of the moment.

Looking forward to your documentation of the successful redo with a new seal.

I have to agree with vwlover77 - frustration has been a key factor with my VW work for the last few weeks. Wishing you well Colin.

Amskeptic wrote: ↑
Fri Jul 12, 2019 5:12 pm
Did we just drive by each other? I was above Spokane WA yesterday in some off-road area screwing up my rear window beyond belief. I was in Post Falls ID the day before, fixing the passenger door window sill, and Missoula MT the day before that and Livingston MT the day before that. Seriously?
Kellogg, Colin Kellogg

Negative, I checked your schedule last week; I would have been 500+ miles out of the way.

Bend last week playing with the LEGO set called "my piston rings," then through Boise cooking the miles until yesterday, into Cour d'Alene playing Dr. Death to .185" of end play all day today, and around Kellogg tomorrow, deciding what to do with an engine that has been cleared for a knock-based warranty rebuild after we recently fixed the knock. 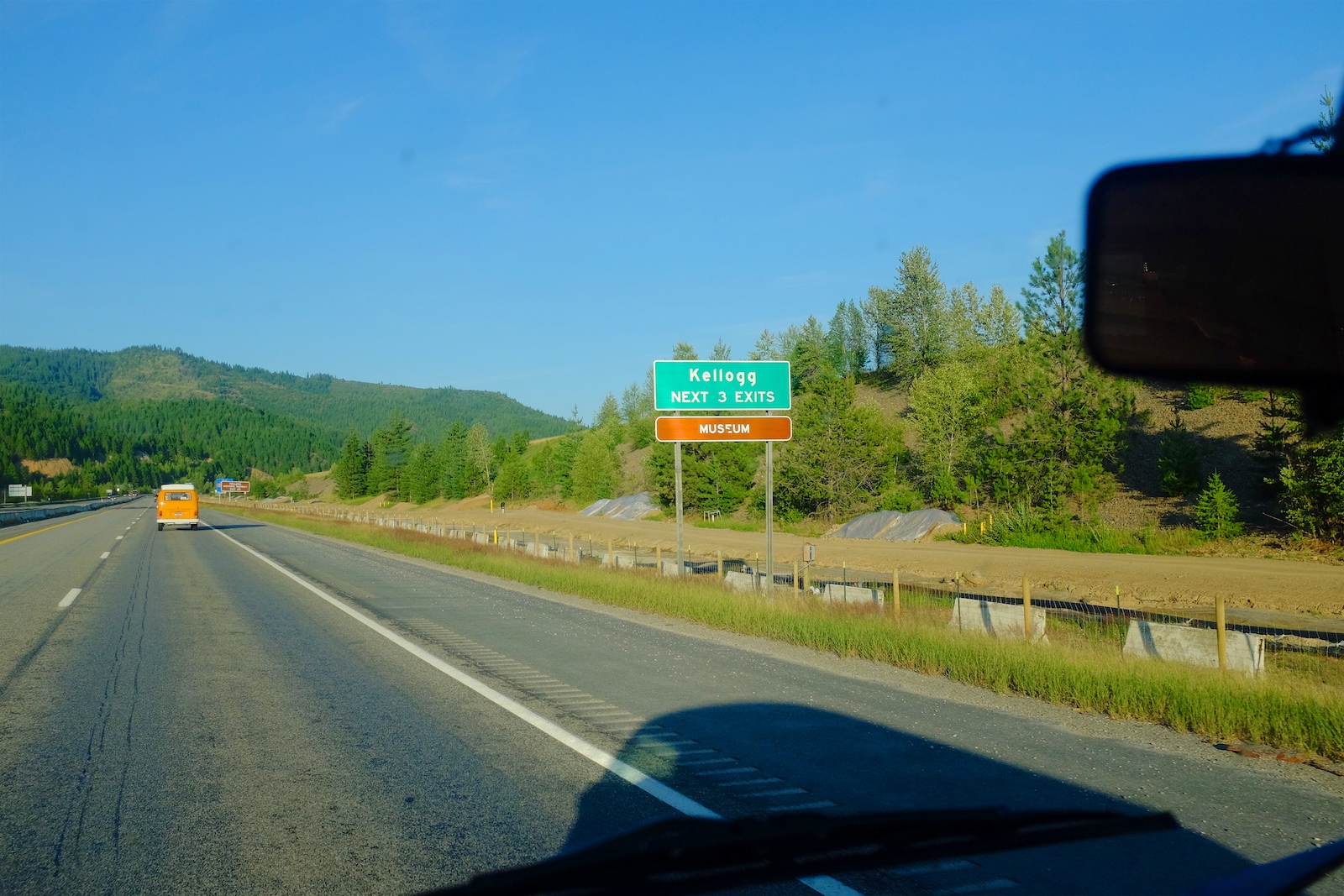 My back was gone, my fingers were gone, the destructiveness of this window reinstallation with NO advantage whatsoever in having done it at all was heart-sickening.

Torturous indeed, and yet you have the will to share the intimate details of the process. Amazing.
Top
Post Reply
11 posts • Page 1 of 1