This is being posted by proxy for my wife, who wrote it.

As Mitch and Colin sat down at the end of the day to wrap up the details on Ludwig, I was fully expecting them to co-create a to-do list for Ludwig like in years past. Opening the conversation, Colin offered to stay another day to consult on Gertie. Unbeknownst to me, they had been discussing Gertie prior to the infamous spring--> (boing!) --> engine case incident from the previous day. After discussing the issues, consulting Mitch's notes, and a quick trip to the engine compartment, Colin suggested Gertie's engine wasn't as dire as we suspected.

Please understand that I had completely accepted the solemn idea that it might be a year or two before I'd drive my, I mean our beloved Gertie once again. We were under the impression she needed a major engine rebuild before driving her again. To hear that there was a chance she would be road-ready in 24 hours was more than I could comprehend. Seriously.

Eager to get the first nerve-wracking solo drive out of the way, Esmé and I were largely absent from the day's events revisiting our local favorite places. (By the way, Esmé's first words to Ludwig while climbing in to her seat were, "I missed you, Ludwig!") And I had so much nervous excitement about the remote possibility that Gertie might soon be on the road that I couldn't bear to stick around the garage. 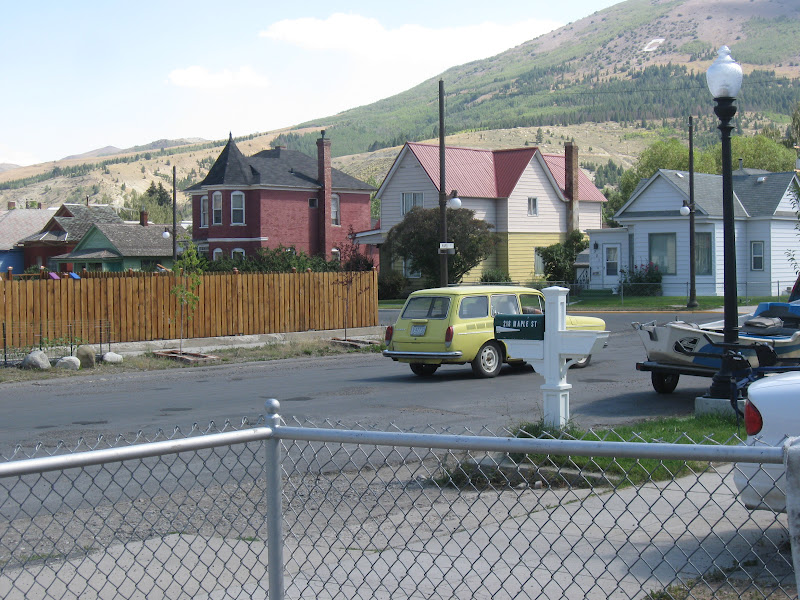 Apparently, for the chunk of the day I was absent there were many hoses replaced, wires checked, an MPS inspected, and some other things I missed. Shortly after our return, she was ready for her first test drive. When they returned Colin happily suggested I take her on a test drive, but I abruptly replied "no" and something about "tick-tock". We were creeping up on the end of the day and I was freaked out that he would have to leave before she'd be road ready. 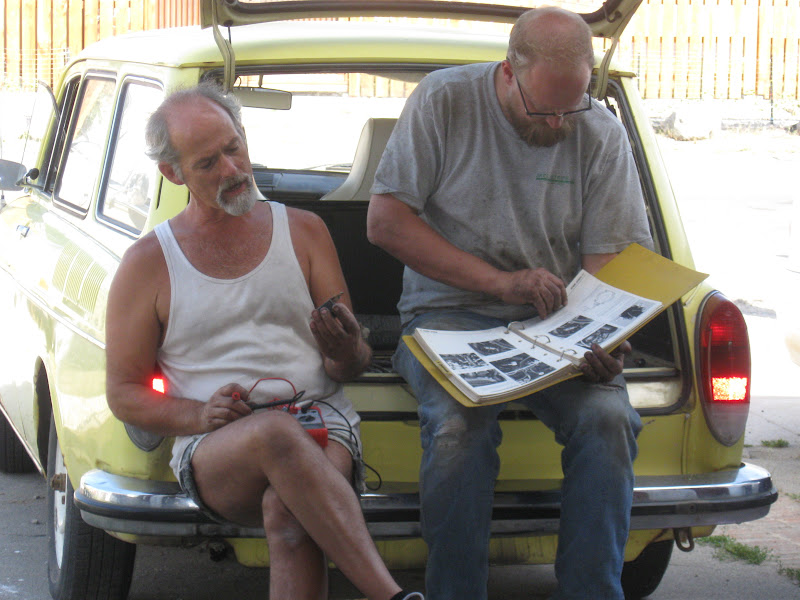 Then they worked on this thing in Colin's hand for I don't know how long. What was it? I don't know. I was too anxious to be paying close attention. But I do know it has a bunch of copper parts, and the were having a hard time adjusting it. I can also share that consults on Gertie require a lot more manual reading than Ludwig. I suspect it's because of her complicated little fuel injected engine. 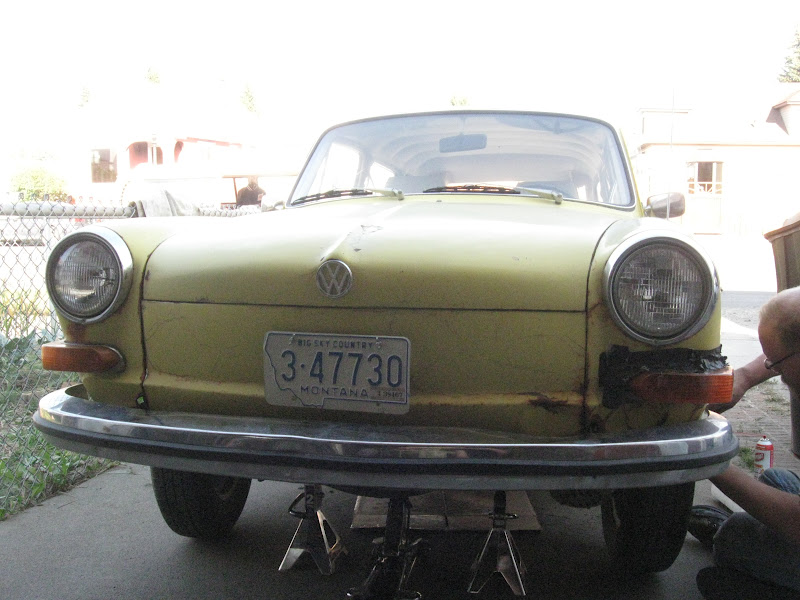 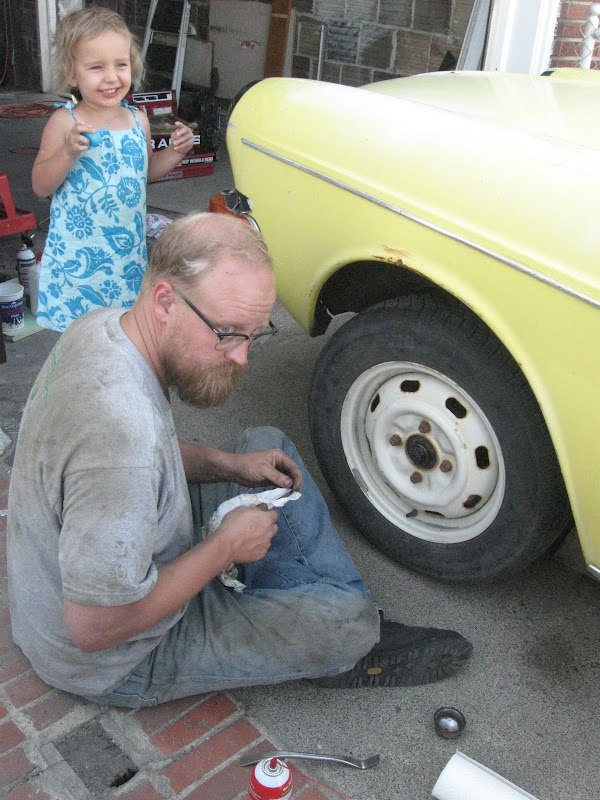 I ended up going on a test drive with Colin later on after all. In case you are curious, Colin also gives helpful driving tips to decrease wear on the VWs. He also offers invaluable tidbits about how to not be driven mentally insane by the worry that accompanies having two old ACVWs as our only sources of transportation.Don't worry, there's more to come. When Colin leaves, the work really isn't over. He's actually more of a consultant-catalyst.
Ludwig--1974 Westfalia, 2.0L (GD035193), Solex 34PDSIT-2/3 carburetors.
Gertie--1971 Squareback, 1600cc with Bosch D-Jetronic fuel injection from a '72 (E brain).
Read about their adventures:
http://www.ludwigandgertie.blogspot.com
Top

=D> well said. I too enjoy riding that wave of 'I can do it' spirit as long as possible after a visit. Anything out of spec will NOT do and I WILL find AND cure it!
Top

Another wife swooning over the car crusader? Must be those "CK" brand shirts, and slightly anorexic body style that reels those women in.
Top

I'll never drive the bus near Rawlins or Laramie again if I can help it. Relaxing it was not. sped372 wrote:I'll never drive the bus near Rawlins or Laramie again if I can help it. Relaxing it was not.

Now that is funny! Not wanting to "do the search", but who on here drove the Bus though all that in winter and looked death square in the eye while doing it?

And Colin, how was that ride? Have any pictures of it?
Up, up the long, delirious, burning blue, I’ve topped the wind-swept heights with easy grace. Where never lark, or even eagle flew. And, while with silent, lifting mind I've trod, The high untrespassed sanctity of space, Put out my hand, and touched the face of God.
Top

That yellow SB is Glady's twin. I dig those Montana plates, and imagine the cold dry weather that car has lived.
http://greencascadia.blogspot.com
http://pdxvolksfolks.blogspot.com
it balances on your head just like a mattress balances on a bottle of wine
your brand new leopard skin pillbox hat
Top

I wish ol' Gertie'd seen more dry weather than she has (have you seen any photos of her rust? It's a little sad), but she's SO fantastic in about every other way that I can overlook her less attractive qualities.

pj - You're right that I was swooning, but it was over the thought of driving that peppy little Squareback again about two years sooner than I expected. I really love that car.
Top
Post Reply
8 posts • Page 1 of 1