I'm still decompressing from my visit with Colin yesterday. Some of you may have been following along with my thread on thesamba: https://www.thesamba.com/vw/forum/viewt ... highlight= and already know about the problems I've been having for the last 4 years with my camper. To summarize my 16 page thread, the Bus hasn't run right in the last 4 years, and has been plagued with failing performance. The engine has been out multiple times, seen a couple mechanics, and had a ton of new parts thrown at it without any change. I've spent most of my summer in the engine compartment of the Bus trying to figure out why I had great spark, great gas, and great compression, but the #3 cylinder remained completely dead.

Over coffee, my dad, Colin and I went over the history of the problems with the Bus and came up with our plan of attack. Of course a valve adjustment was the first thing on the list to do. Unfortunately the valve adjustment started off the day rough. My previous adjustment was very sloppy, and the lock nuts were marred up. We pulled the spark plugs, cleaned them up and reinstalled. I checked the resistance of the plug wires and they checked out. We checked the valve timing overlap, and valve lift using a very scientific, yet not so scientific method and found the lift of 1&3 was half of 2&4. Thinking there might be a problem with the cam, we pulled the rockers, pushrods and lifter on #3 and found that it was dished.

(Until it was Colin's turn to turn it over and I could heckle him on the wrench slipping off!

After I reinstalled the lifter backwards, and Colin corrected it, we reclocked my distributor because it was 90* off, and static timed it and started it up. Immediately the Bus ran on all 4 cylinders but #3 went dead after 30 seconds. We then set the high RPM timing and checked the advance worked properly. At this point, Colin recognized the deep knock that was identified on my samba thread. We hooked up a vacuum gauge, and the vacuum signal danced all over the place, similarly to the wiper on the AFM. Not good, there was disrupted air in the system. We plugged off all the vacuum lines, and we properly reinstalled the two hose connectors on the S-boot. The vacuum gauge still didn't hold steady.

Colin, feel free to add in anything that I forgot...

After the Bus fighting us for most of the afternoon, we had our first test drive around 4:00. We cruised(slowly, on 3 cylinders) up the road to the school(church) and Colin gave me a driving lesson about double clutching. In the school lot we found the engine knock lives in cylinder 1 and Colin tortured my engine trying to get #3 to come online. It didn't.

I got in the drivers seat with Colin in the back and we got back on the road. He pulled the plug wires on each cylinder, as we were driving and 1,2,&4 had a drop, but 3 gave no change. Correct?

"Why are you downshifting when you don't even use the gear?"
"I dunno"

We got back to the house, and pulled the #3 plug for a compression test, 140. We ran the Bus without the plug in the hole and it was very loud and exciting. Looking into the plug hole, we thought the seat for the exhaust valve had dropped until we turned the engine over and the valve moved normally. We did the same on #4, which gave us 120 psi on the compression test. The valve checked out good visually. At this point it was 7:00 and Colin was getting pretty pissed off at my engine. He mentioned the Vanagon in Michigan was the first Bus to break his streak of not having a Bus defeat him and thought mine would be the second. After some thought about engine physics, Colin wanted to see the intake valves so I pulled the runner and using Colin's broken 1976 mirror we found it.

In the final hour, Colin defeated my Bus. Burnt intake valve on #4. The Bus goes back to the engine builder later this week.

What a great experience the day was. I tried to soak up as much as I possibly could, but a lot of it I have yet to fully grasp. My extent of knowledge doesn't go very far into the depths of my Bus engine, but I know a lot more now than I did the day before. Thank you Colin for being patient with my Bus and myself.

great writeup and nice pics! sorry to hear of the painful process but good to know there's progress....


why would a burnt intake on #4 result in #3 having no impact when pulling plugs?
1979 California Transporter
Top


why would a burnt intake on #4 result in #3 having no impact when pulling plugs?

Disrupted airflow was the phrase of the day, that is what we were chasing.

# 4 pulls an intake charge just before #3. But if #4 has a slice of intake valve missing, its *compression/power stroke* sends a blast up the intake runner during #3's intake stroke. Not only does it rob #3 of oxygen, it reduces the fuel supply at the AFM as the wiper gets pushed towards lean.

We sure did have fun running the engine with spark plugs #3 and #4 pulled one at a time. We had the compression gauge hose end free to the air so we could feel the dynamics as the engine idled.

Before we found the metallurgically endangered #4 intake, I was getting all excitable about the reduced lift at #3 and #1 exhaust valves, and we spent some quality time inspecting the cam lobe and #3 lifter. I was almost-but-sort-of-knew-better about to blame that caved lifter and possibly flattened cam lobe for #3's dead behavior, but we all know that #1 would suffer a corresponding amount since they share the cam lobe. The wiper and vacuum gauge were too specifically jumpy. They demanded an accounting of air flow. That is why I had to insist on seeing the intake valves:

Agree that this was a great write up and excellent diagnostic troubleshooting by Colin. I wonder how many folks that are still alive today have Colin's knowledge and experience with these old VW's to have tracked down the root cause.
1970 Westfalia bus. Stock 1776 dual port type 1 engine. Restored German Solex 34-3. Restored 205Q distributor, restored to factory appearance engine.
Top

Thanks for the great write up, fascinating reading.

I too have a couple of concave lifters, both intakes 3 and 4. Are they just a symptom of wear or can they actually accelerate wear on the cam?
Top

There is a fascinating interplay between cams and lifters on horizontally-opposed Volkswagen engines, and the Type 4 has the most unique quirks of all. First off, a few forum members noted that the available supplies of solid T4 lifters were slightly softer than stock, meaning they would wear into a concave pattern before the OG lifters would. This is preferable to the camshaft wearing out first, because lifters can be exchanged in an afternoon, and camshaft swapping involves splitting the case and it can only be done in two days if you're a wizard. The wear in the lifters shows as a GRADUAL loosening of the valve adjustment. When mine caved, they were .002" loose at most adjustments for the first 5,000 miles of the engine, then they stabilized. So they wore down quickly, then stayed caved in.

About the T4-specific issues: The intake cam lobes on the T4 engine are longer to deal with special spacial requirements of the T4 exhaust and lifter systems. Great reading is found here, on our own IAC forum!

Also, the air-cooled VW platform works its camshaft harder than any other car on the road, with multiple lifters running off the same lobes, so cam wear will be faster than most other cars. The cams Must Be Hard to deal with this, so any slack in the manufacturing of aftermarket lifters isn't likely to help the lifters keep up with the cam with regards to wear.

The surface of VW lifters is hardened with some kind of treatment. After enough smashing into the camshaft and rotating slightly, the wear surfaces can, and sometimes do, wear through and allow the cam to contact soft metal. Ask tristessa about his T4 lifter that wore so bad you could see right through it!

Terrific report! Very cool to ride along with the problem solving. What a way to learn!
Top

this is far more riveting than anything on television.

Amazing that you got 120 PSI on the #4 compression test with that cracked valve.
And you are so lucky that the valve head (or portion of) didn't decide to part company with the stem before you detected the problem.
'81 Canadian Westfalia (2.0L, manual), now Californiated

"They say a little knowledge is a dangerous thing, but it is not one half so bad as a lot of ignorance."
- Terry Pratchett
Top

B) And you are so lucky that the valve head (or portion of) didn't decide to part company with the stem before you detected the problem.

a) I know, that stupid compression reading threw us off our game, but there it is - 120 psi and a burnt valve.

Excellent post. So much to learn with all these different issues and great work on finding them!!

71whitewesty wrote: ↑
Fri Jul 07, 2017 8:05 am
Excellent post. So much to learn with all these different issues and great work on finding them!!

It is worth remembering to flush your assumptions out at least once a minute when dealing with weird symptoms. Just had ANOTHER weird one with djmiller's Vanagon in Mankato (second visit, to be written up shortly, was almost as baffling as the first).
Colin 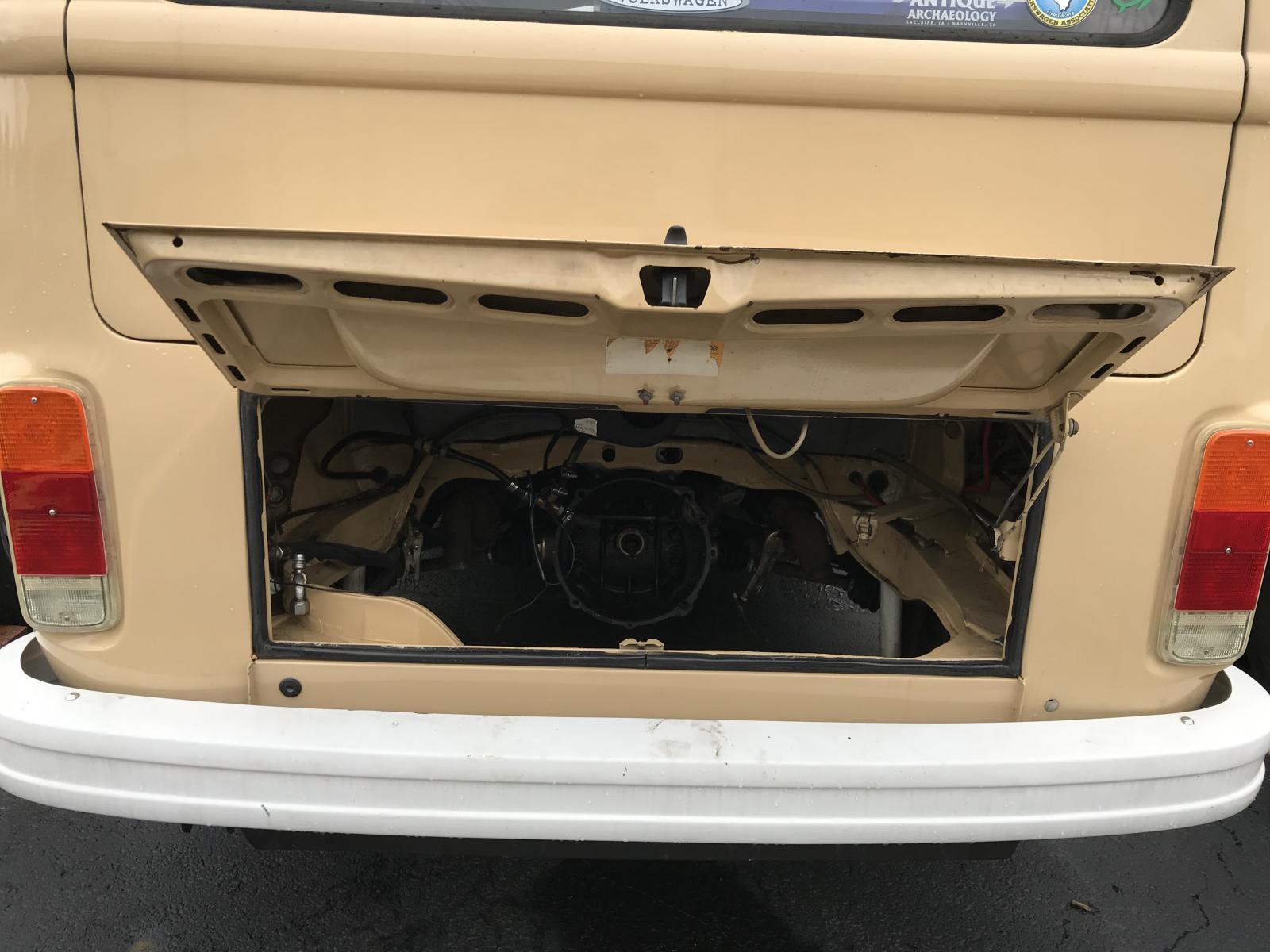 The followers of the samba thread will recall that a lot of the problems with this Bus were result of half-assed-ness from a "reputable" aircooled shop. After Colin's visit, we knew the motor was fried as result of the work performed by this shop.

The engine builder and the shop are two different entities, we no longer trust the shop, but we trust the engine builder. After talking to him about what had happened, he stood behind his work and promised to make it right no matter the cost. He has since broken partnership with the shop. The problem was pulling the engine and getting it to the builder.

One of the mechanics who worked for the shop(and worked extensively on my Bus during his time there) decided to part ways with the business a few years ago and open up his own aircooled shop. He left the business because he saw the poor quality of work that was going on there and disagreed with the owners desire to cut corners. He has done a lot of great work for me on my '68 Beetle and I trust him fully. The quality of work coming from his shop is top notch, and they stand behind everything they do.

He moved into a new building in October and the Westy is their first resident. They pulled the engine within the first week and disassembled down to the block to send back to the builder for a fresh set of heads and some other bits and bobs. The season is over here, but the engine should be back in and running before Christmas. I'll be back to post an update then.
Top