Y'all, Thou Shalt Not Give Short Shrift To Vanagon Diesels. They have buckets of charm and stout little hearts with a simple sturdy and famous little inline four block that needed NO modifications to be pressed into diesel service. Eat your heart out, Cadillac.

There are very few oddities to a diesel engine sitting in a charming '82 Vanagon. It is merely the Rabbit 1600 inline water-cooled engine modified for diesel operation. There is a serious fuel filter and PO installed water separator on the right, but most everything else probably looks familiar enough.

Instead of a distributor, it runs a vacuum pump for the brake booster.

Diesels are so efficient, they don't make vacuum, they don't have throttle plates, you do not control the engine's output by strangling its air supply. No, they breathe full gulps of air and compress it with a 22:1 ratio (unlike our punky 7.3:1 gas compression ratios). That heats up the air enough for spontaneous combustion. Our gas engines would rattle and ping and kill themselves, but diesels sidestep any need to compress the fuel and the air, they just compress air and inject the fuel at the instant it is needed right into the cylinder.
The injection pump has a crankshaft with pistons that force diesel fuel under about 1,200 psi, to each cylinder's injector in the firing order of the engine. The injectors will not inject unless you hit their thresh hold opening pressure.

Our issue for the day was to replace the reinforced rubber timing belt. That poor timing belt. It has to open eight valves with eight individual cam lobes and it has to drive the injection pump. The timing of these must be accurate. A 22:1 compression ratio means the pistons are coming up out of the block and just missing the valves on a good day. One tooth off . . . pow.

The new belt was shorter than the old one, enough that my Lexus-Method of painting and counting the critical belt teeth (28 from camshaft to pump, 48 from pump to crankshaft) was rendered hideously unworkable:

Fortunately, this Weisswurst was possessed of uncommonly good cheer and we soldiered on to a successful conclusion of that job.

This Vanagon showed all the classic Volkswagen heart on our test drive. Weisswurst communicates with his steed, and I could see that every shift counted, every shift was an opportunity to land it into 3rd gear quietly. His wince when the transmission made a noise was all the proof I needed that this car would try to hang in there for him.

We found out just how hard the car was trying, when we took out the drain plug.

Airkooledchris? You have been usurped. Your little metallic palm tree drain plug was a piker compared to this:

You just have to ask, what is it?

Only after I cleaned it, did I realize with horror why 3rd gear demanded such care:

The above are the below ORANGE keys. Can you believe this car kept giving us a gear? The synchronizer is normally pressed against the gear by those keys to brake the gear into synchronization. Then, after the slider is allowed to move over and lock the gear to the shaft, the keys are supposed to land in little grooves with the help of a wire spring to help keep it in gear! The keys here were all broken in half at a specific point. :

So, weisswurst & fam are looking for a proper '82 diesel Vanagon transaxle.

So, weisswurst & fam are looking for a proper '82 diesel Vanagon transaxle.

Thank you for lovely accommodations and dang good lunch, good grief, you were lucky I didn't just snooze at the pool all afternoon after THAT lunch..
Colin

Colin, you can come over and snooze at the pool

anytime as long as you don't mind barking a few orders at me while I work on the wursts with my new found confidence! =D>

as far as the transmission, one has been found but it needs a VW friend to rescue it from "improperly packed seller man" who thinks cereal boxes are suitable for UPS shipping!!

It's paid for already in san jose waiting on a forum member to pick it up for me and help with better packing so I can send a pre-paid UPS label to that helpful forum member.

pic below, note the brand of cereal box he used and the only word not obscured by tape, weird huh?
jeff
"I drink, therefore yes ma'am..."
Top 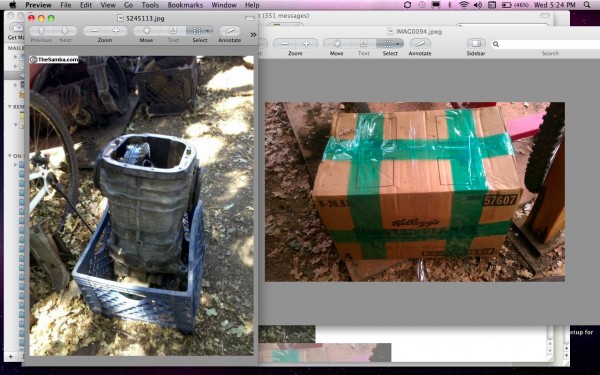 Nice to see you are saving one including keeping the diesel engine. Here in the NW all the diesel have been bought up and converted to subie vanagon's or a late model VW TDI. Those diesel transaxles are sought after because of their gear ratios. I know of a Vanagon diesel double cabin truck in Suriname that's been for sale for a while. Keep thinking it would be awesome to import to the States as no one wants it their due because no one their knows how to fix it.
Geoff
77 Sage Green Westy- CS 2.0L-160,000 miles
70 Ghia vert, black, stock 1600SP,- 139,000 miles,
76 914 2.1L-Nepal Orange- 160,000+ miles
http://bleysengaway.blogspot.com/
Top

Bleyseng wrote:Nice to see you are saving one including keeping the diesel engine. Here in the NW all the diesel have been bought up and converted to subie vanagon's or a late model VW TDI. Those diesel transaxles are sought after because of their gear ratios. I know of a Vanagon diesel double cabin truck in Suriname that's been for sale for a while. Keep thinking it would be awesome to import to the States as no one wants it their due because no one their knows how to fix it.

Geoff, you should get it! I'm in if it's reasonable too!

Just as long as you can stand the speed (or lack of) I personally enjoy the slow vanagon driving since my other car is a jetta sportwagon TDI and I just got a ticket too last month he said I was going 86!!
Funny thing is I had a complete weekender set of interior panels with a perfect condition pop out table
and the matching z-bed in the car I was bringing home from Sarasota for installation in the Weisswurst. I told the cop I normally drive slow by force but he didn't care.

I got such a good deal the interior that it almost made the ticket worth it too!

we don't camp in ours but we do camp with it! she rides right behind the MH and provides a valuable service for supplies when we go into town and also she ends up being the everyone wants to sit in during the hangout time at the campsite too.
here's a shot of the weisswurst behind in West Virgina...
I could really see myself towing a double cab with another motorized accessory on the back, I wonder if a
small golf cart could fit on the doka bed? my Roadmaster towbars are rated for 6K.... hmmmm 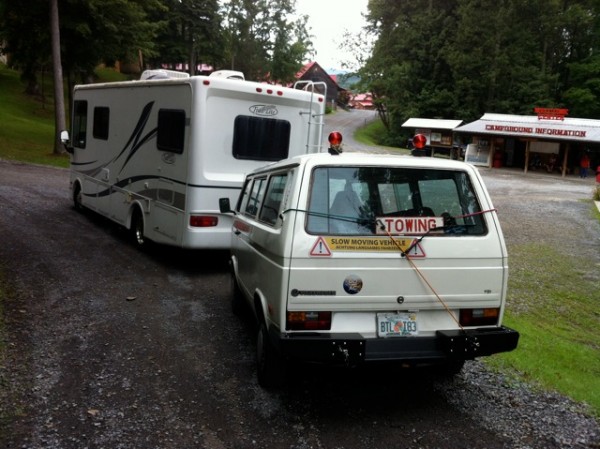 I am hoping that jivermo is able to fill in pictures here, because I took nary a one. We didn't Do much. I think we adjusted valves, correction, he adjusted the valves while I was playing with the monster carbs on Austin's pretty silver bus with red interior (say hi, Austin).

We philoshophized and regaled each other with shtories all day, and disassembled an air flow meter that had a warped vane (warped vanes are the only deal-breaker for an air flow meter, there is no cure. Spied a Pablo Neruda poem written in its original spanish on a plaque. Read of a reference to Koyaanisqatsi further up in this thread. Jivermo . . . a man of culture.

At the end of the day, jivermo sez, "oh, one last thing. The heat doesn't seem to work." We looked at the fan motor and determined that it needed some lubrication. Note that these motors have an active magnetic field at all times, so they always feel resistant to rotation, but if they slow down after being energized, you can be sure that their bushings are in dire need of oil.


The return trip to Pensacola was uneventful as far as Lexus Possum Games, but I did decide to hammer it a little. Across the Big Cypress Preserve, I locked it in at 90 mph and turned on the local FM YerGoinTaHellRadioShow. This one was about HOmoSHECKsuals. Such earnestness. Such smugness. Such a brittle reliance on old texts from a long time ago.
"Your bodah . . . is not your OWNah, your BOdah belongs to GAWDah. When you feel feelings for someone of the same sex as you, you must ask God to turn you away. RUN! We thank you for your continued support of our ministries. This month, your contribution will qualify you to receive our new calendar for children! Yes, a beautiful daily reminder for them to HEW to GOD's WAY, each day they will read how they can remain on the path to Eternal Life. Bless you."

When I could no longer take a full breath, I switched the station. The next radioshowpreacher was all about how we really don't know that we are not going to straight to hell. Eternal flames. "Your five senses will be completely functional down there in Hell, you will smell the sulphur, you will feel the heat, you will witness the fornication and debauchery, you will hear the demons wicked laughter, and it will be thus for ETERNITY."
Are they serious? It conjures up the WWF to me.