Last year I rebuilt the engine on my 1981 Vanagon (stock California spec aircooled) and it was up and running well! That was too good to last for long because the last time I tried driving it, the van started with a very rough idle for a short while and then it just died on me. Since then it will always start and then die immediately after it catches, and I cannot figure out how to fix it! If I unplug the cold start injector, the engine cranks but does not start even briefly.

I went through the ECU plug tests on the AFC FI manual: https://www.thesamba.com/vw/archives/ma ... Manual.pdf and found everything was as it should be except the voltage from pin 10 to ground with the ignition on was 0.3 volts instead of 12 volts as the manual specifies. According to the AFC manual this is the voltage supply to the computer, however terminal 1 on the ECU does have 12 volts so I am confused. I do have a California van which has many wiring differences, so maybe that is one of them. Fuel pressure and volume tests were good.

Weirdly while troubleshooting I found that the engine started, idled, and revved fine if one injector was unplugged. Which injector was unplugged made no difference. As soon as the fourth injector was plugged in, the engine instantly died! This was very repeatable behavior until I tried switching the whole wiring harness to a spare I got from Pick and Pull a few years ago. This made the problem worse, with the engine only running if two injectors are plugged in, though after sitting for a month it now only starts and then dies. It otherwise continues the start, catch, and immediately die. I did notice the spare harness had a few ohms resistance on the grounds, but it seemed to be in better shape overall. My multimeter reads 1.75 volts on an unplugged injector connector when the engine is starting.

I then opened up the relays and found the relay next to the double relay that is only on California models (I think this is the fuel enrichment relay) had a cracked board inside! I don't know if this caused the original problem or if it cracked when I opened the relay box, but I can't find this part 071 906 069 anywhere new or used! I glue and soldered the broken board back together and it seems to be passing voltage okay now, but it has made no difference to the way the van runs. I have attached a photo of the cracked relay.

I'm stumped now except for continuing to try to find that relay. What could the problem be and what should I do next? 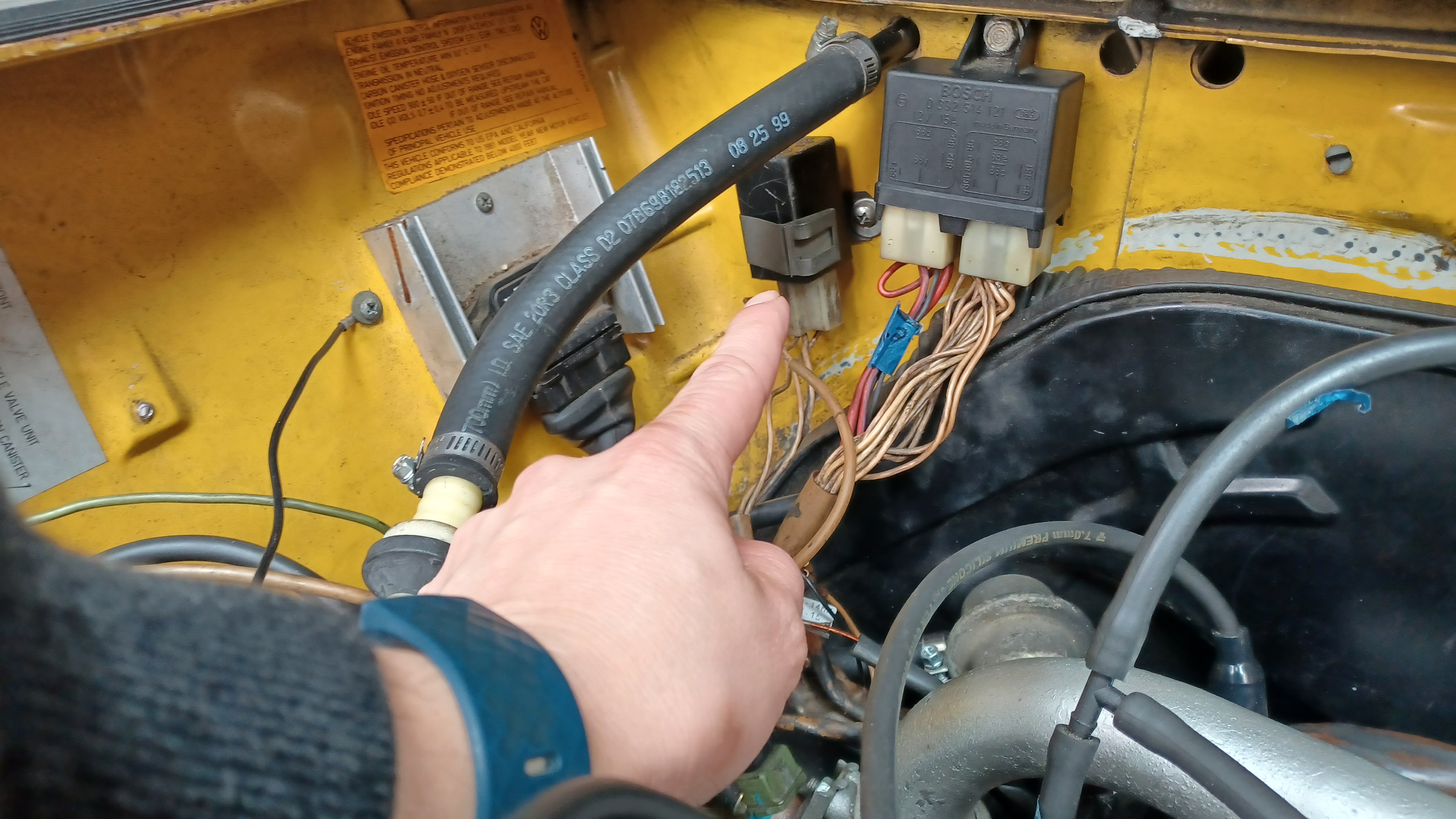 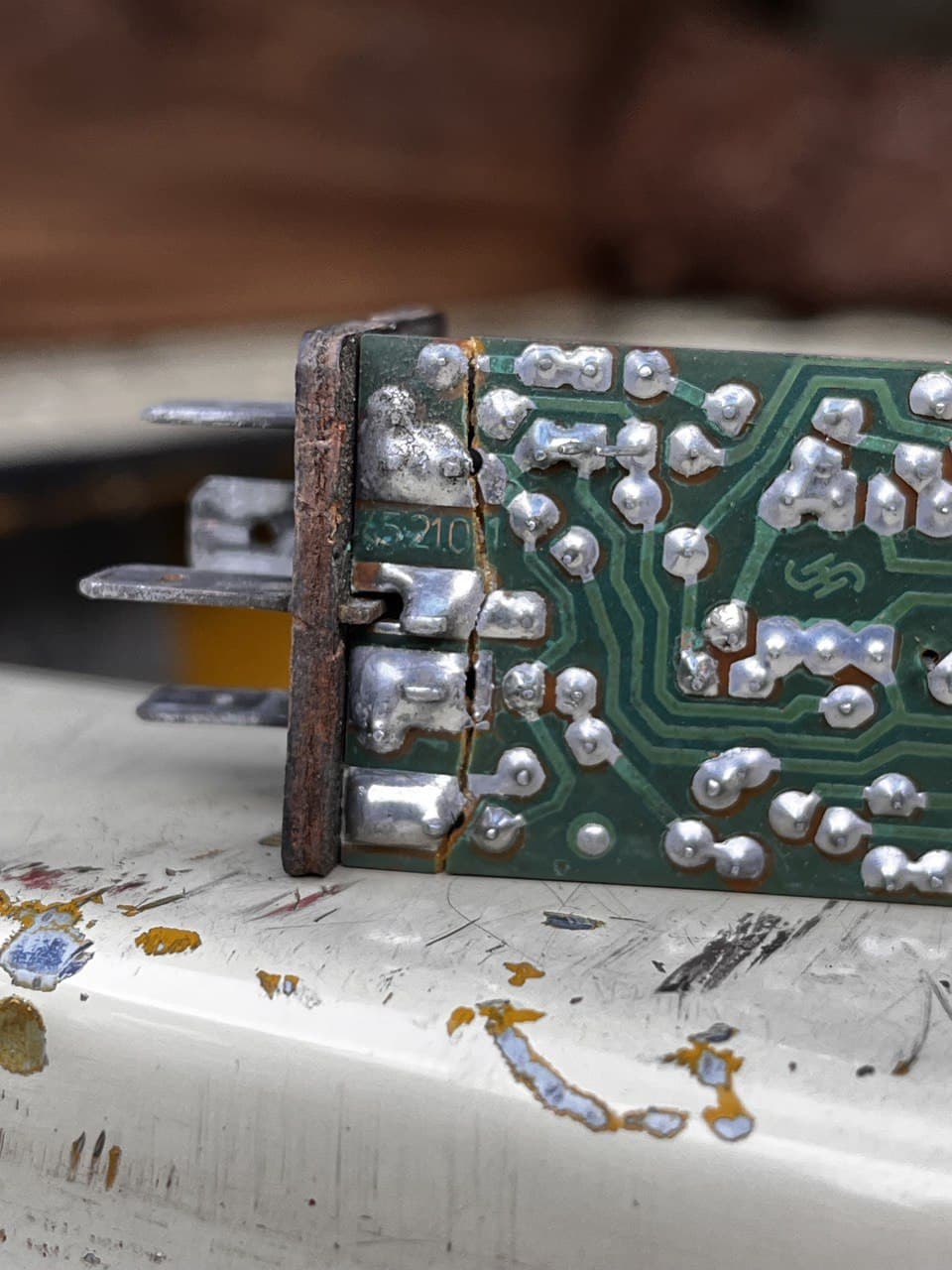 Re: Aircooled Vanagon runs only with 2 or 3 injectors plugged in, not 4

Hi, and welcome to IAC.

To be brief, the damaged relay is referred to as the "OXS" relay in Bentley. As you've surmised,it is part of the fuel enrichment system that comes into play when you mash the throttle to the floor. Its purpose is to protect the catalytic converter from being damaged by ingesting unburnt fuel when you mash the throttle at low RPMs. It does this by being wired in series with the wide-open-throttle (WOT) switch and monitoring the engine's RPM through the coil signal. The relay stays open-circuit as long as the engine speed stays below 3000 RPM. When the engine speed is greater than 3000 RPM, the relay closes its circuit, enabling the WOT switch to do its job when you mash the pedal.

So the only thing you are missing with that relay being broken is full-throttle fuel enrichment, which doesn't have anything to do with the running problems you are having, but I suggest you remove the broken relay from the harness for your troubleshooting just to take it completely out of the equation.

After that, the best advice I can offer is to be certain of all of your grounds before you start chasing anything else.
'81 Canadian Westfalia (2.0L, manual), now Californiated

"They say a little knowledge is a dangerous thing, but it is not one half so bad as a lot of ignorance."
- Terry Pratchett
Top
Post Reply
2 posts • Page 1 of 1