Keep it clean, children may be present.

So it has been one year, almost exactly to the day that I even came around this area of the forum... And to be honest, it feels like I've barely done anything!

Well, it doesn't help that I acquired the Scout and did a ton of work on that rig too.

Like I mentioned, the leaves were faaar too tall and the centering bolt was just a bit off spec, so something had to be done. Instead of having yet another few leaves made, I decided to just have the hole 'bout half an inch and just put them back in.

Before shot of the wheel The safety piece of metal And the end result... Since then I haven't had one wheel-well scrape from regular driving and hitting bumps, so that was finally solved. Next thing to happen was I added a bung to my exhaust so that I could finally get an O2 sensor in there. It ain't the prettiest, works like a charm though! The O2 sensor thing really ticked me off though... The big-brand one that everyone has is ridiculously expensive in my opinion, considering that I actually understand how the things work! After a lot of search I stumbled onto this little site that has a variety of units, including a DIY kit that you build yourself!

In theory it's great and overall it wasn't too bad for assembly, as it turns out my unit is partially faulty, and I have yet to trouble shoot the darn thing.
Still, I like the fact that entire thing ran me ~40 versus the 150+. And at this point... Well, things came to a crawl. One April rolled around I was ushered into simple jobs territory, and in May I was given the job to work on The Part. My final project before I had no evenings, or weekends for that matter was an attempt to fix the cooling.

Relatively small modifications were done to the flanges in the dog house to finally hook up an electric fan. It sorta did the job, and at the end of the day it ended up being a minor loss for cooling ability. On the plus side I no longer had a big whopping fan rotating when I did static timing!


This was the last big thing I did until mid-August... Nay, until mid-November actually! Always busy, always running about, and generally fearing for the well-being of the GMC's engine. Finally I had the time to dive in yet again, and so I did, this time replacing the stock small radiator with a stock large radiator! Then things started rolling again... Both my will power and my urge to actually fix things!

First up the beginnings of a new electrical system. At first I thought about making it all original, however by the time I'll be done with everything, what'll be the point? There's relatively speaking a lot of new hardware running off of relays and such, plus there's others things I'll be adding that require a complete rewiring job. Once that box went in, the first thing to get installed were the new fans. Rather massive units, and quite honestly a tad huge for this radiator, even though it's bigger. There's a big Alu radiator waiting to have a few modifications done, then for that to go in... Speaking of electrical, new alternator was installed too as those fans do draw quite a few amps. Even with the new alt I'll have to actually change the pulley so that it'll spin fast enough at idle. With all of this electric nonsense going in one of my other peeves was fixed finally to... Fuel pump.

The mechanical one is more or less dead, as it had a very hard time starting the rig up after say, 2 days or so. Not even the choke helped, after a while it became standard procedure to spray carb cleaner into the intake to start the sucker up... Very ghetto. Some time around this time I also got something back that took months to make the round... I disassembled my front axle ages ago, and tried to machine bushings into it, however never really got far. A coworker saw me struggling with lathing and basically hooked me up. 110 for machine work and honing for bronze bushing. There's a groove running on the outside to distribute the grease from top to bottom better. Before this I wanted to finally bolt down the rear seat, and some 2+ years after that fateful day it finally happened! Due to the sheet metal shape in the floor though I had to make tiny stand-offs. They seem to work pretty well! Onto the Big Kahuna!

I have been waiting to do this for a while now... A very long time relatively speaking. This last weekend, so March 19th, I did the Front Axle Swap, Again. One of the detail items here were the rubber bushings. I finally took the time to replace the poly upper shackle bushings with rubber as they were in a bit of a hard spot to reach. To get the bushing to fit I had to do a bit of sanding. From what I can tell, it is a softer ride and it was necessary as the polys were all polys were too bumpy for me. The lo-and-behold, it's finally in... Time to dress it up! But alas, shennanigans! I pressed in the right spindle upside-down, so out came the axle, the caps, and I had to press the king-pin back out again. Before I did that though I had supper and a beer... I still don't know how I managed to screw it up so bad. After an hour+ of work, and a lot of toiling, things went in like they should, relatively speaking.
I had to cut a few corners as I didn't have things like the right bolts for the backing plates. I also reused the hubs with the old bearings and seals as the new ones needed too much cleaning and I ran out of time. I faced many delays. Lacking new bolts and a few other things I had to do a fair bit of recycling off of the old axle. At the end of the day the swap went through, and I even drove the rig home at about 4AM or so. It was honestly the first time ever that I drove one of these vans that didn't have worn out kingpins, and it was a bit magical.

It tracks much better now and like I said pebbles don't feel like boulders anymore when I drove over them. The downside is that now I have to look at the steering box, as I still have about 15 degrees of play. Much better than 60 degrees that I had though. SOME PEOPLE ARE LIKE SLINKIES - NOT REALLY GOOD FOR ANYTHING BUT THEY BRING A SMILE TO YOUR FACE WHEN THEY'RE PUSHED DOWN THE STAIRS.
Top

Right now it's starting to head into the functioning good. The "looking" part is still a bit further down the road.
Xelmon: Naked, I have a van. Colin: Clothed, I have a bus.
Top

Now get the back seat wired up so it works right. :-P
Remember, only YOU can prevent narcissism!
Top

I still got that wiring harness laying around and I did use it too!

Well, to the extent that I touched the wires directly on the battery terminals to operate the fold-down ability. =D
Xelmon: Naked, I have a van. Colin: Clothed, I have a bus.
Top

It's a bit of a trick on the eyes, perspective and all.

It's the same radiator with first a teeny-tiny fan, then two much larger fans. The earlier picture also has no over-flow tank ahm, zip tied on there.
Xelmon: Naked, I have a van. Colin: Clothed, I have a bus.
Top

This is the mod you have to do! 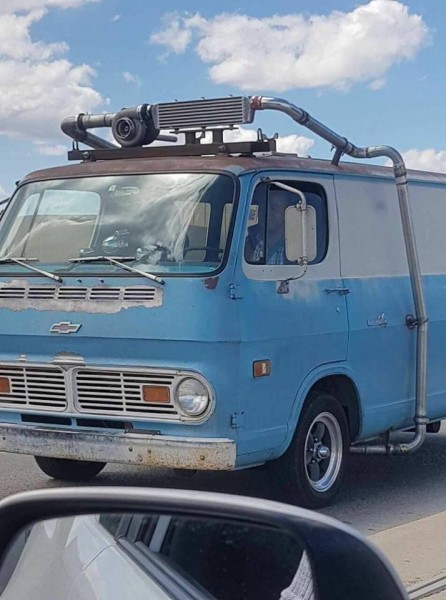 Oh yeah, I've seen that in the recent weeks...

That setup wouldn't have any turbo lag at all...
Remember, only YOU can prevent narcissism!
Top

'scept someone called in the rig and I had a pretty note left on it by the local fuzz. Joy.

So yeah, she'll be getting painted very soon (tm).
Xelmon: Naked, I have a van. Colin: Clothed, I have a bus.
Top
Post Reply
132 posts