That makes me feel a little better. Here is some of the things I have been working on...

Pop Out window seals were shot, actually all seals, but pop outs were the first to get attention. Read all I could about getting the seals in place followed by chrome trim but nothing seemed to help keeping everything in place while 'thumbing' the trim in place. Trim is tough to begin with, a few years ago I gave up on the trim on my windshield glass for the super beetle convertible as I destroyed two pieces of chrome, wasn't interested in a third, but I digress...

Anyway after fighting the drivers side pop out before figuring out best way, the passengers went much easier. The answer turned out to be Gorilla Tape which I used to hold the fixed part of the seal and glass in place while inserting the trim, took 20 minutes to install the chrome vs. the multiple hours on the first window. 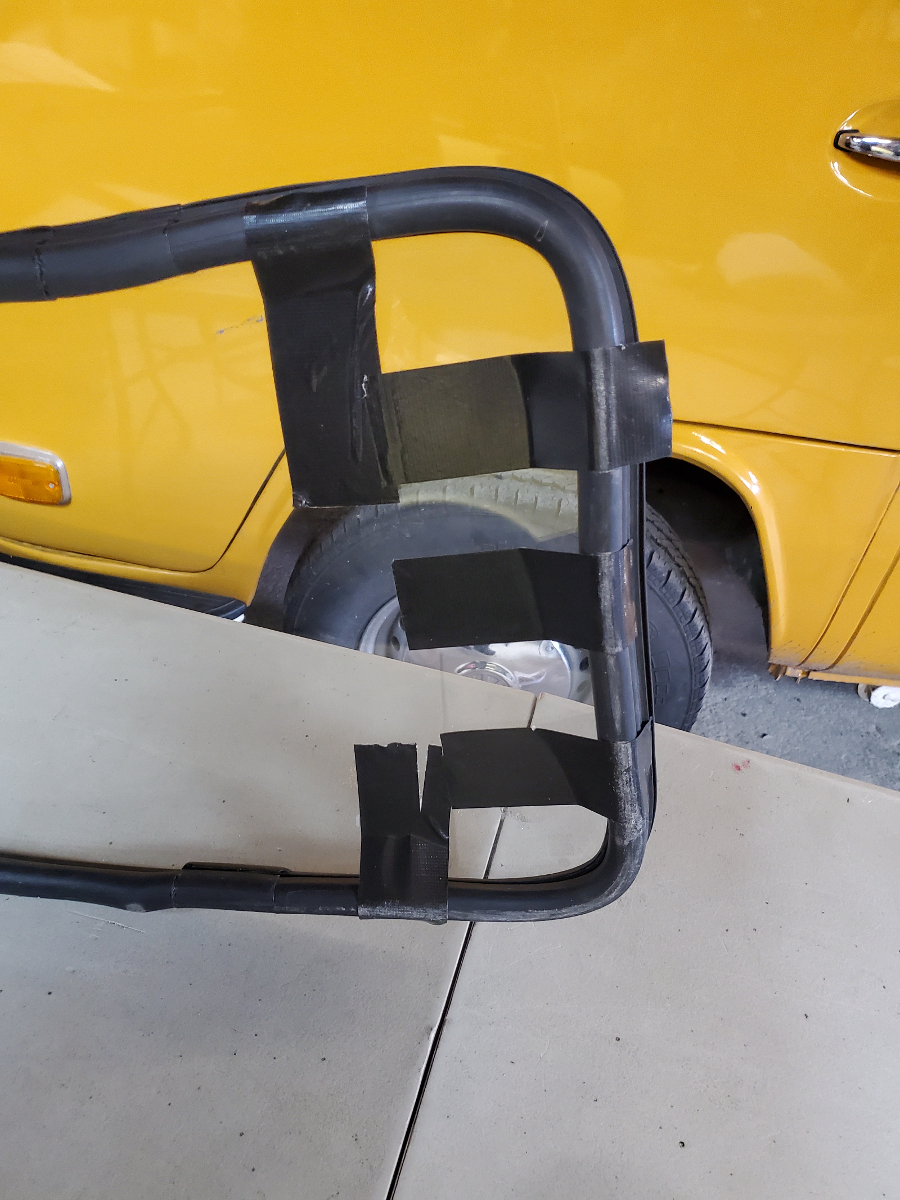 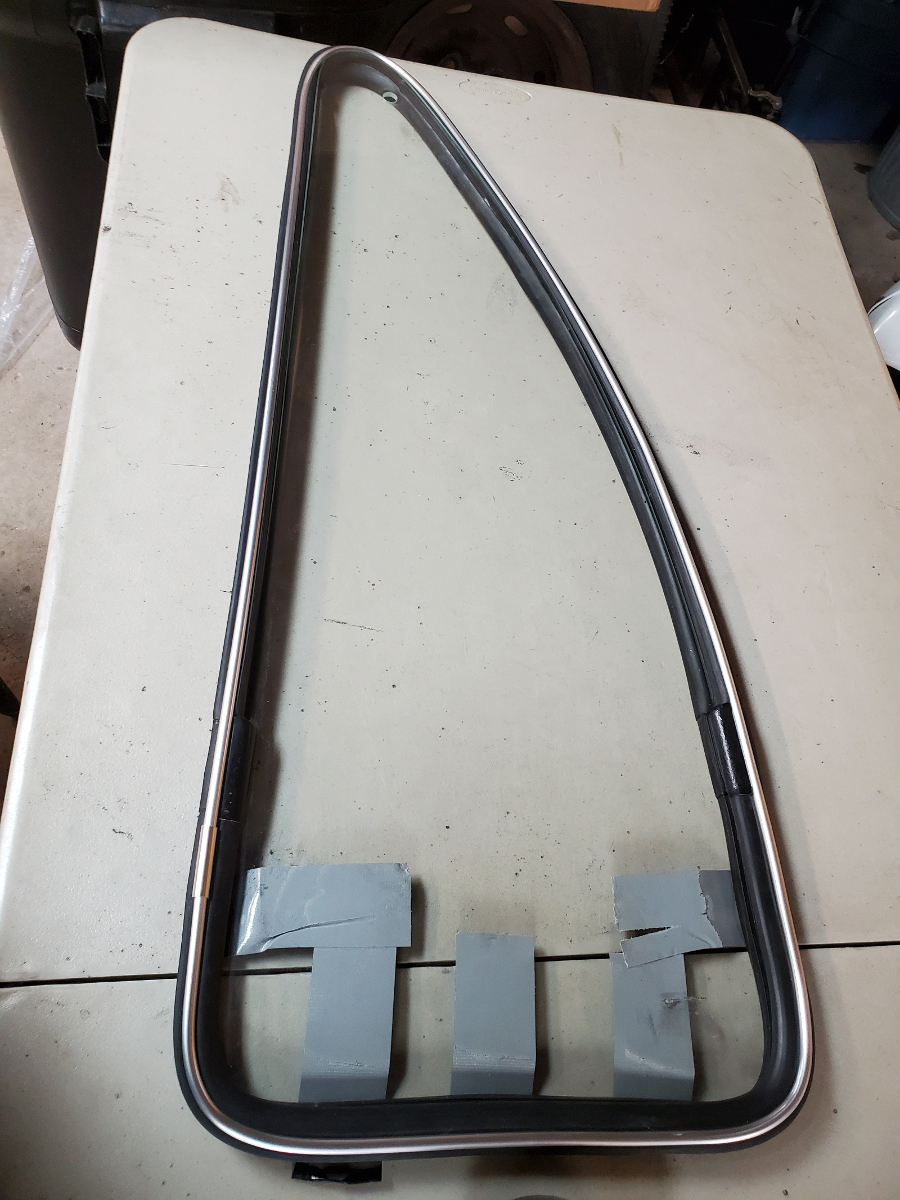 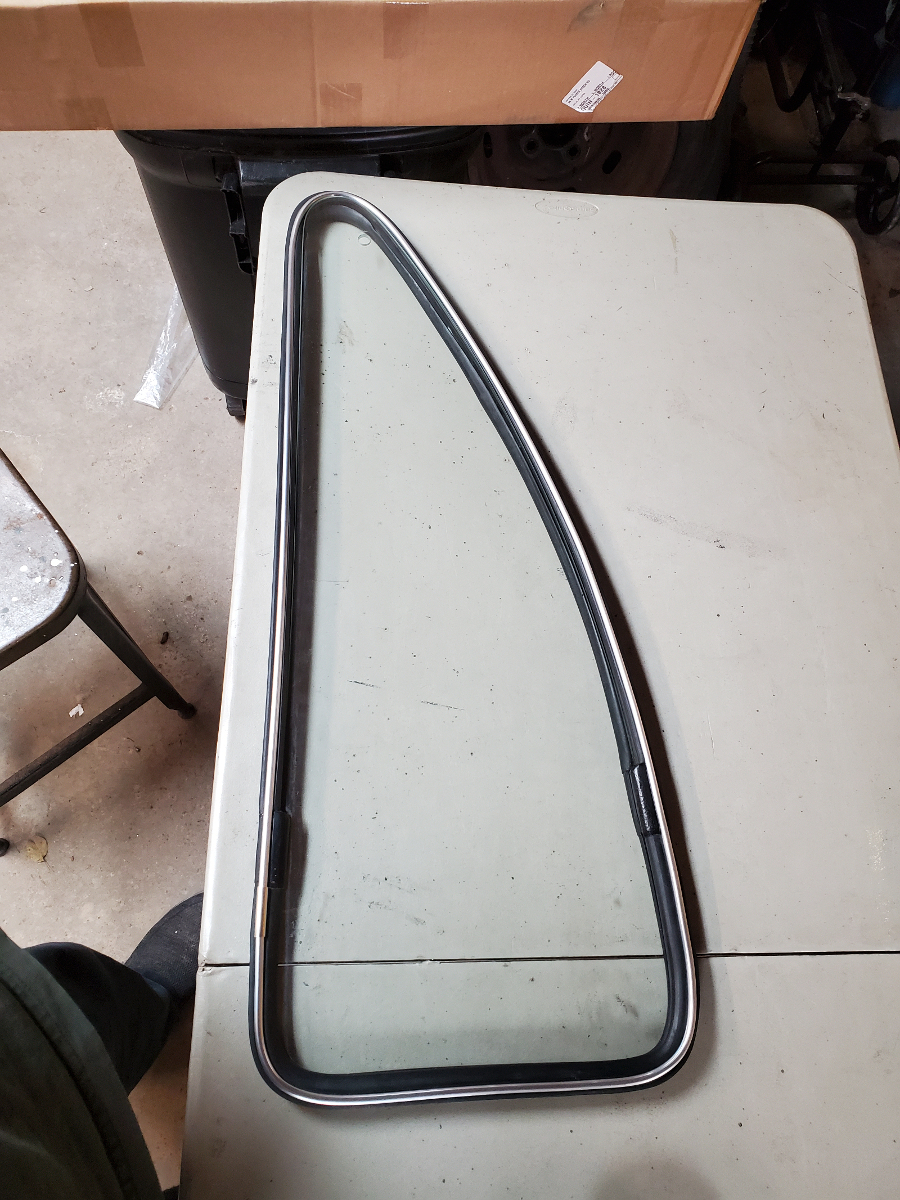 Some additional pictures, pop out removal. Note that I taped window in place as I was solo on the removal. Also there are four of these nuts to remove and two of the sheet metal pieces on the inside, two outside. Do not lose the little nuts, I used vice grips to grab and hold as I didn't want to drop one. 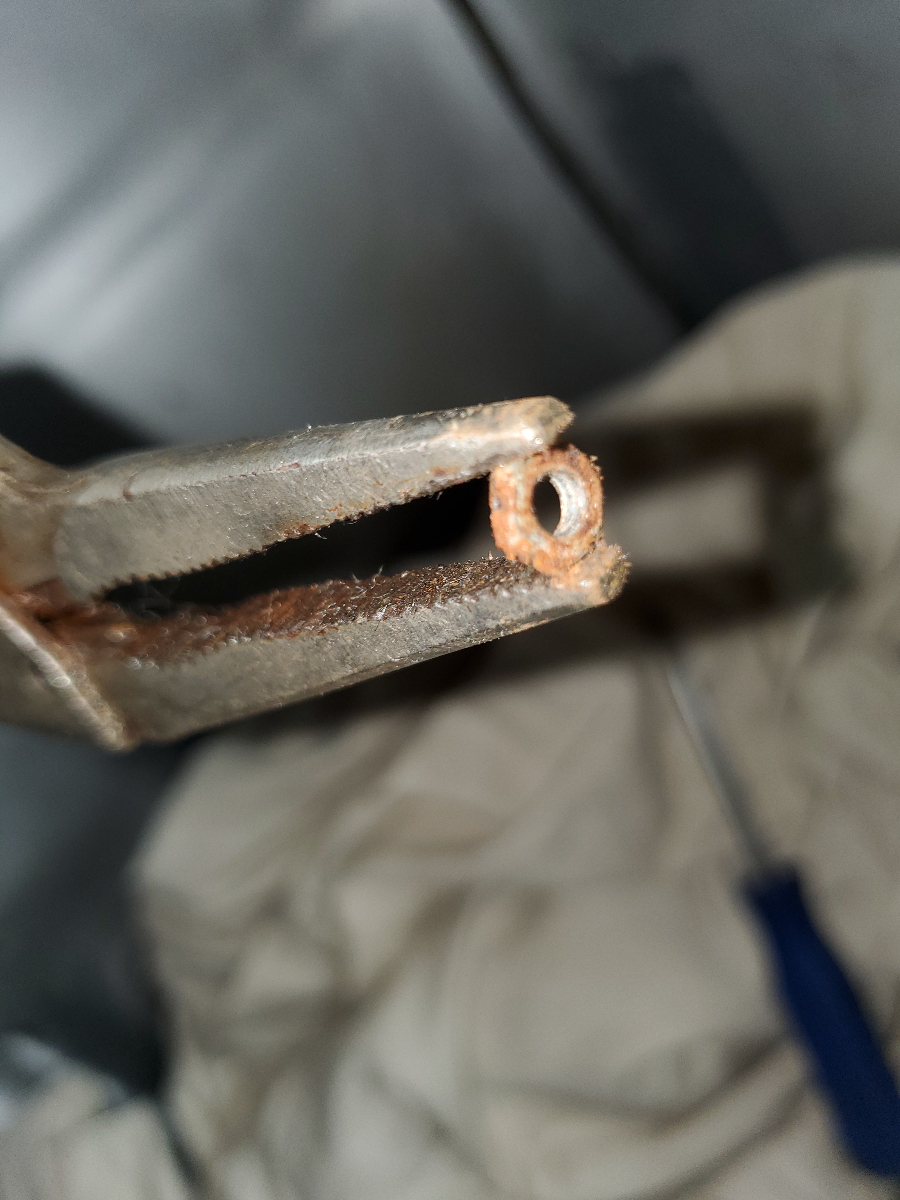 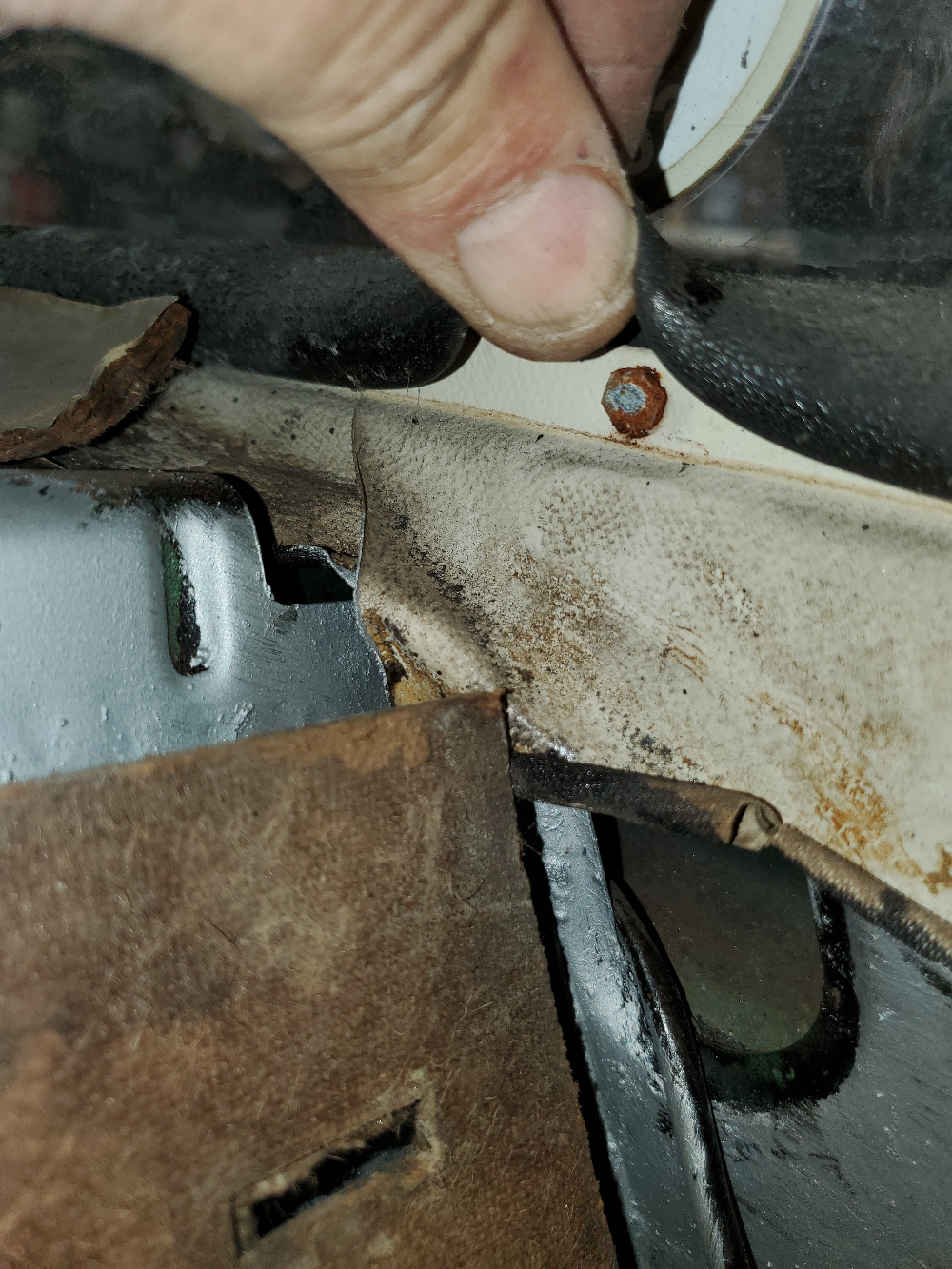 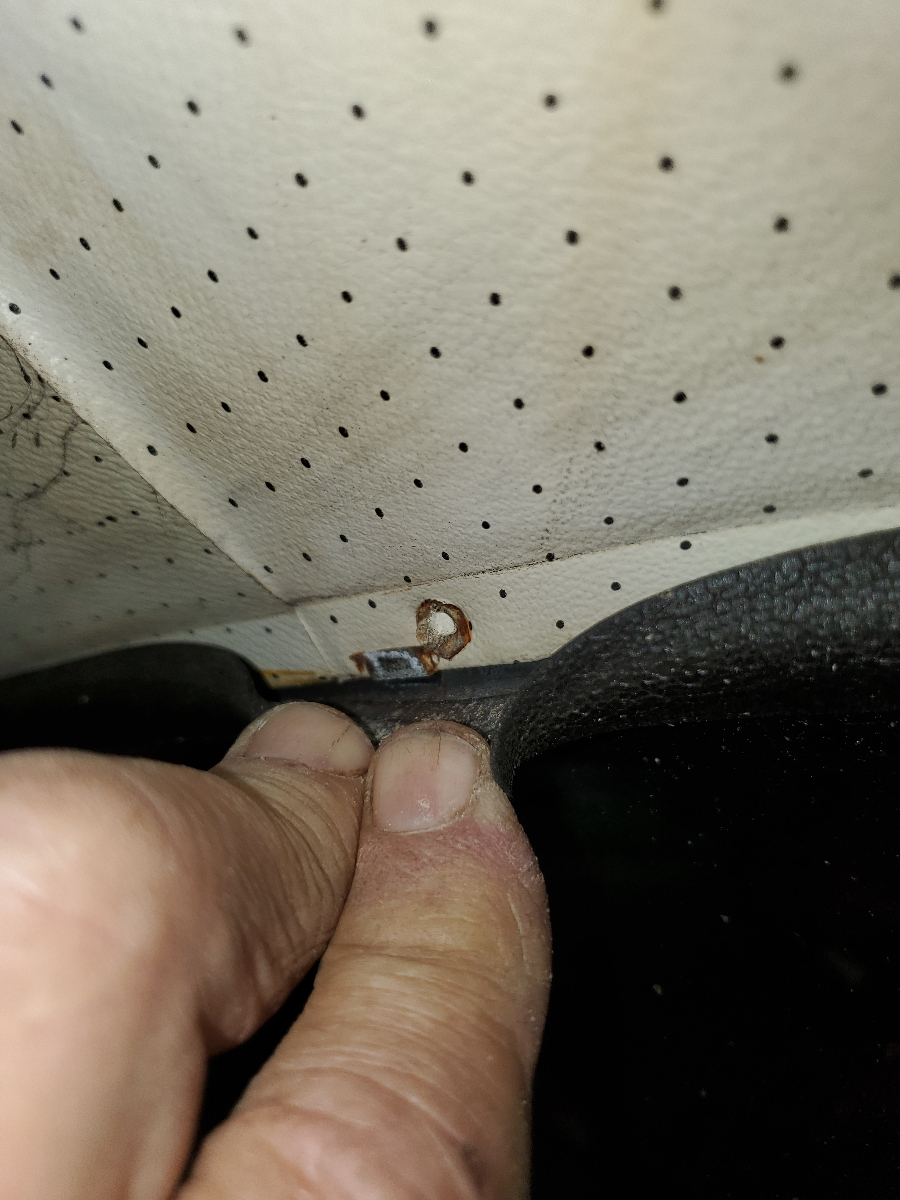 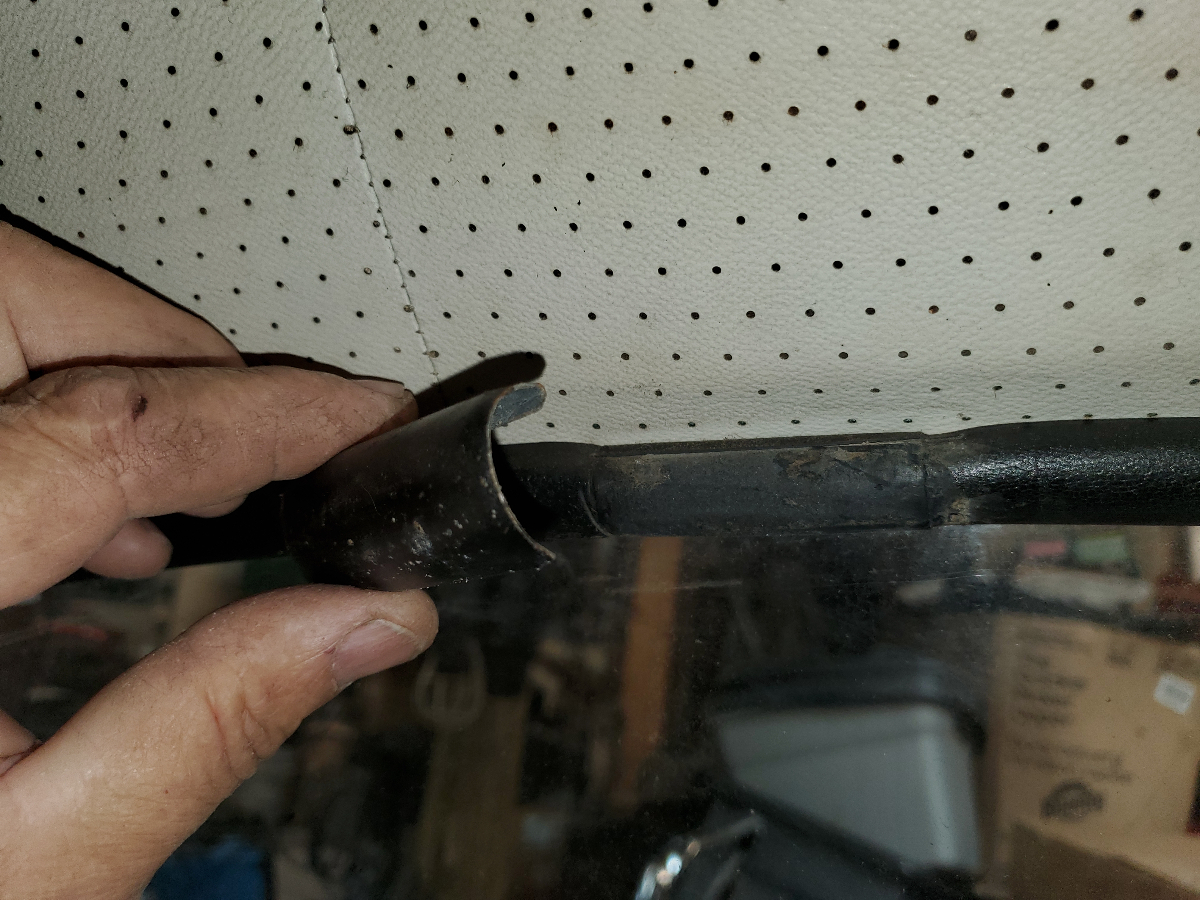 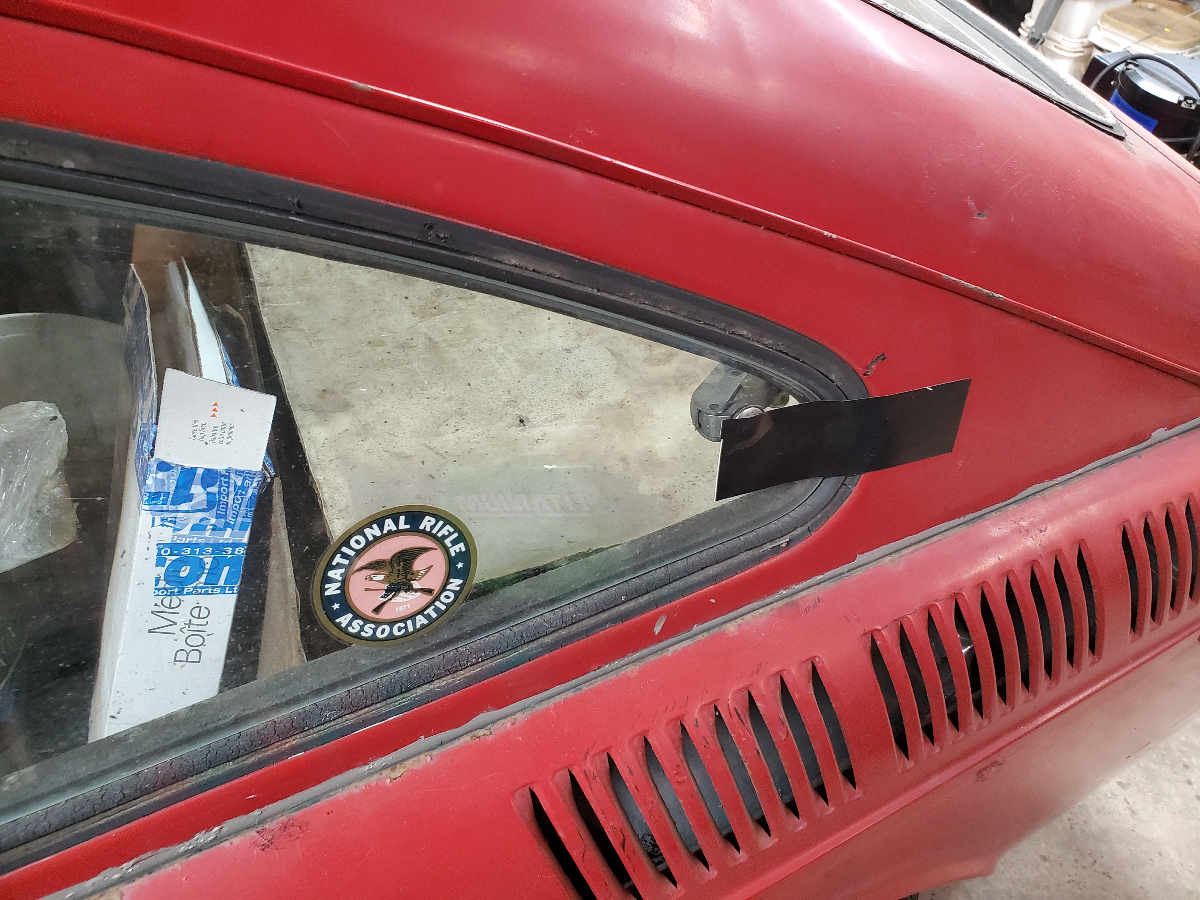 Also removed windshield and rear glass. Only rust spots were on the rear in the lower corners. Even though they were just pin holes I cut out and welded in patches. On the front there were toothed metal strips on the top and bottom, hadn't seen those before, should they go back in when I replace the windshield? Also, on the rear they had two small clips in the corners, what are these for? 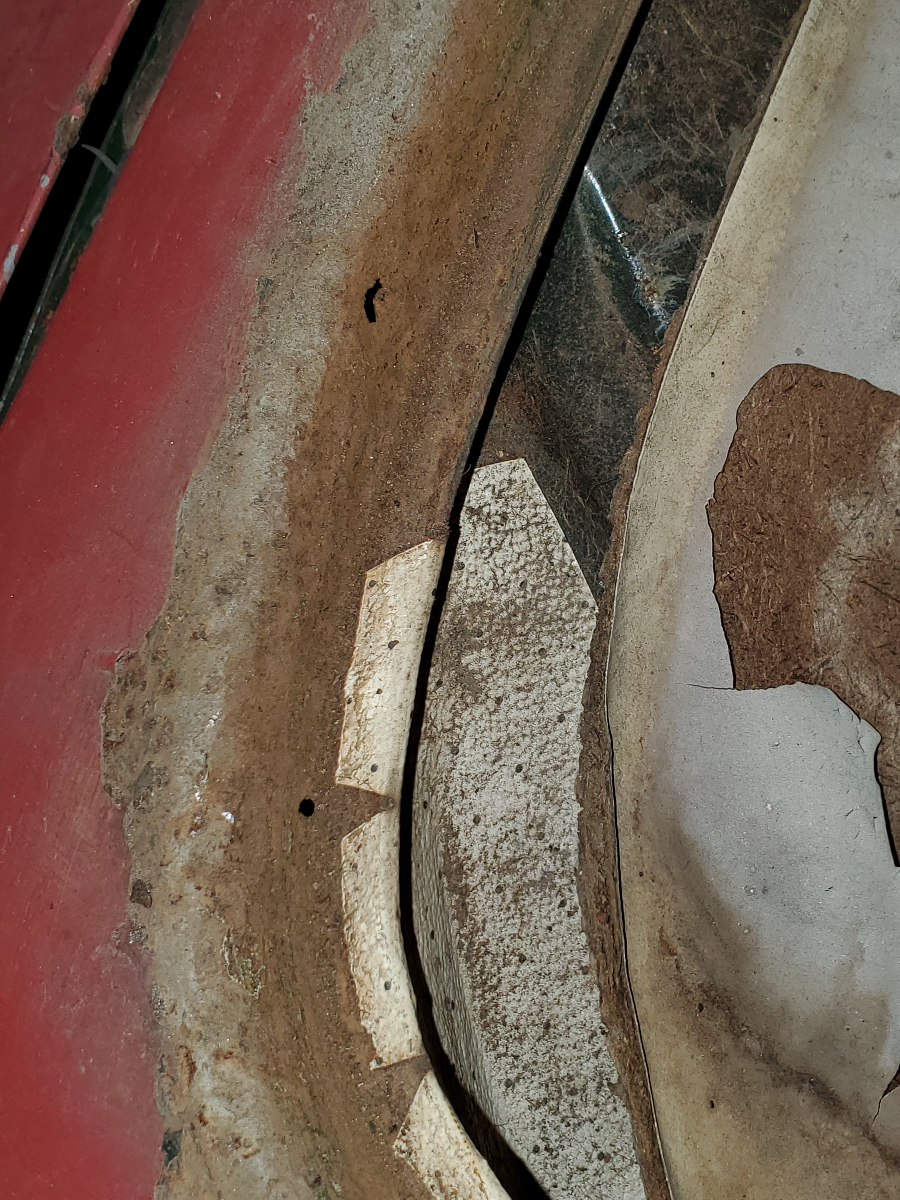 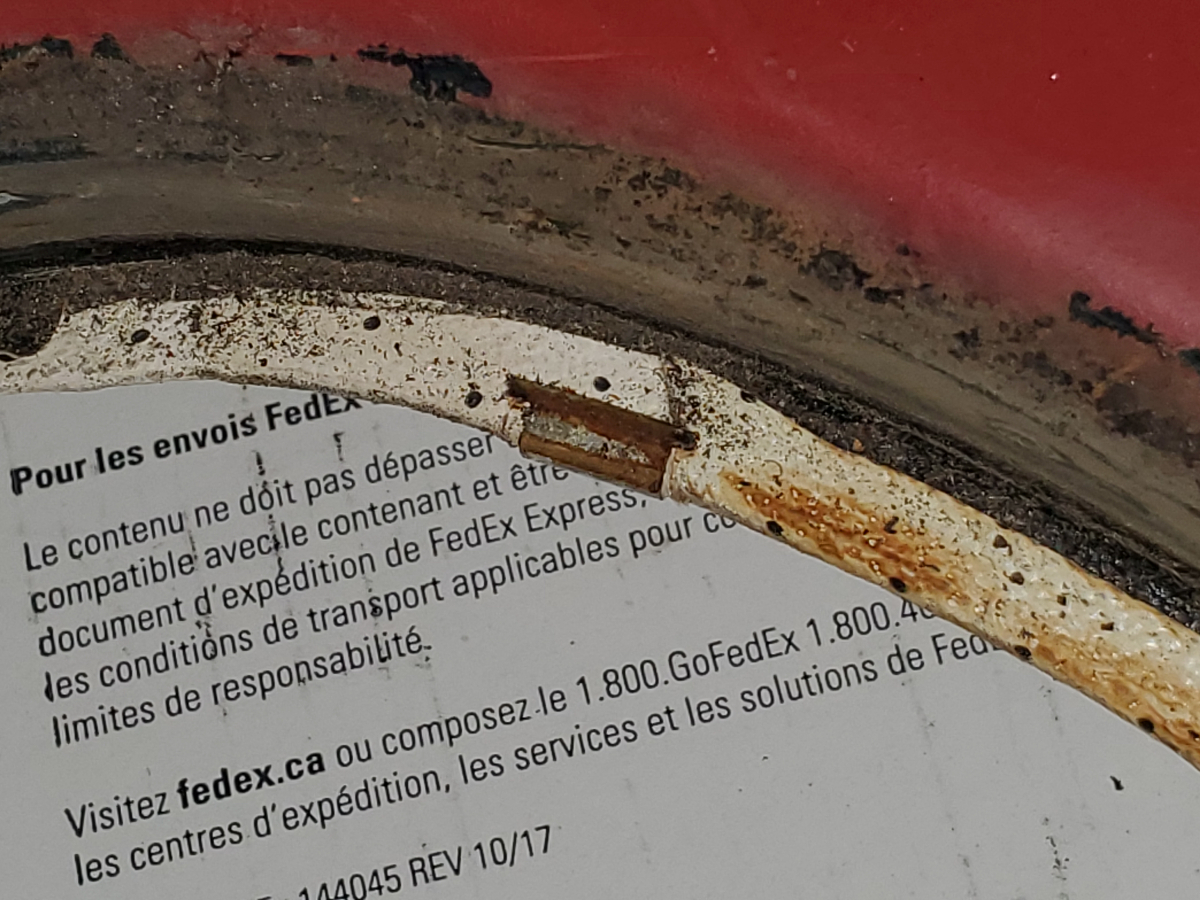 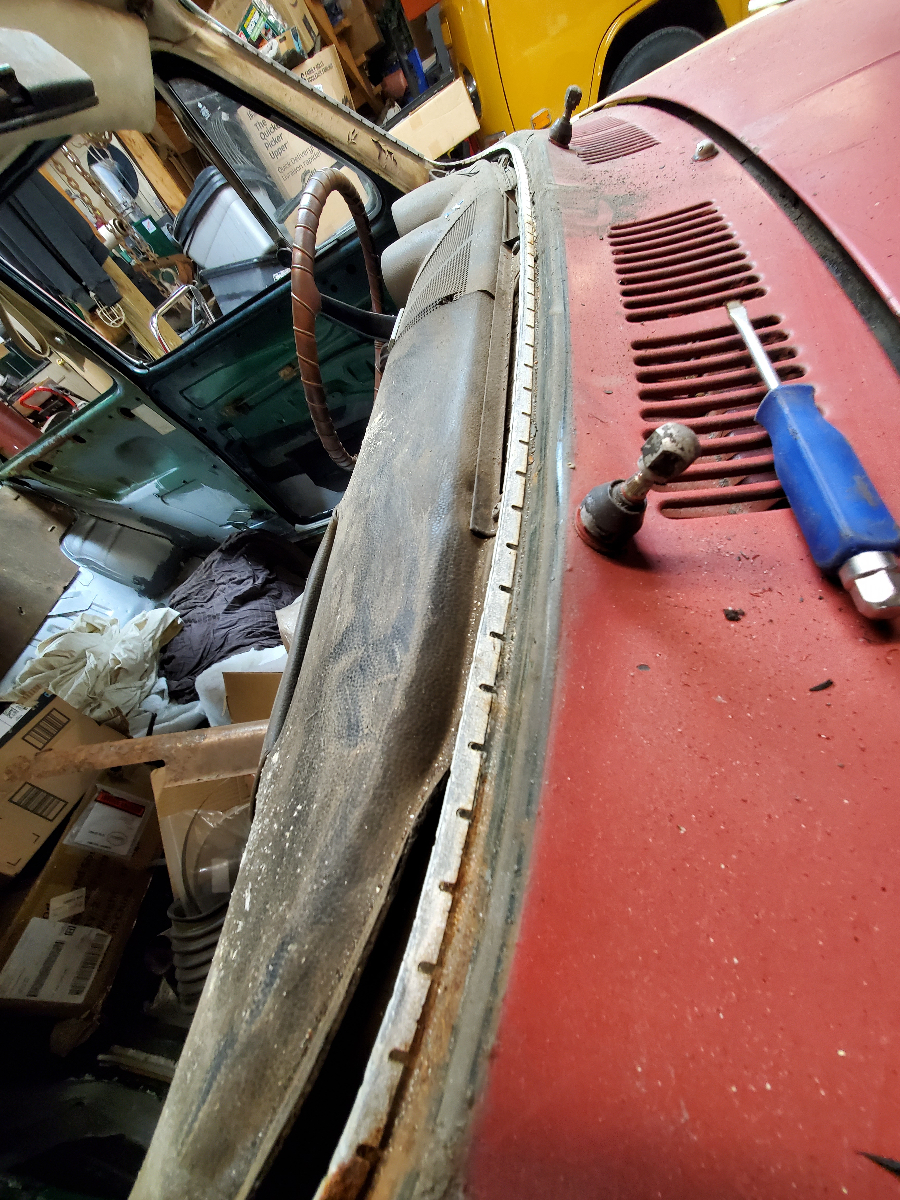 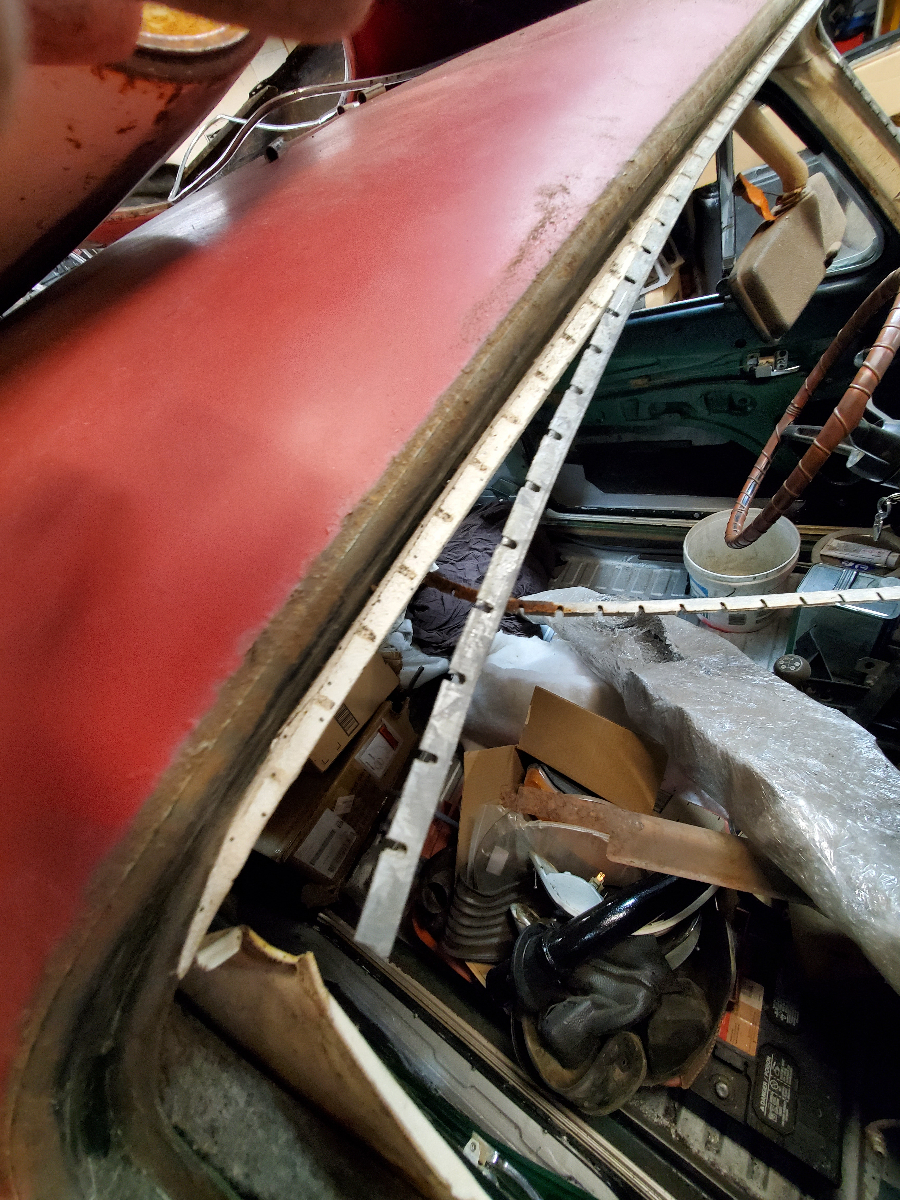 This morning improved the chrome trim process even further, allowing me to install both windshield and rear glass seal and chrome in less than an hour. By using a blunted angled pick and some tape was able to easily complete with minimal thumb damage. Warning, be very careful with the pick as it can, if your'e not careful, cause damage to the seal (I had none but could see it happening) more importantly your hands, that definitely happened! Also note the windshield is not installed just set in place for photography purposes, plus it looks great if only temporary.

Now that I have used this technique I feel like I should go back to my 72 Super Beetle and try the windshield again. Not sure I can remove it without damaging the seal though, will have to think about that.

Next I need to begin the sanding and metal clean up process as most is ready for next steps, i.e. welding and sheet metal work is pretty much complete. I attempted to remove old paint with paint remover, didn't even touch it. Next I will try shot blasting, hate the process but don't see myself wire wheel grinding all of it off, although if that is the only viable method it shall be done. 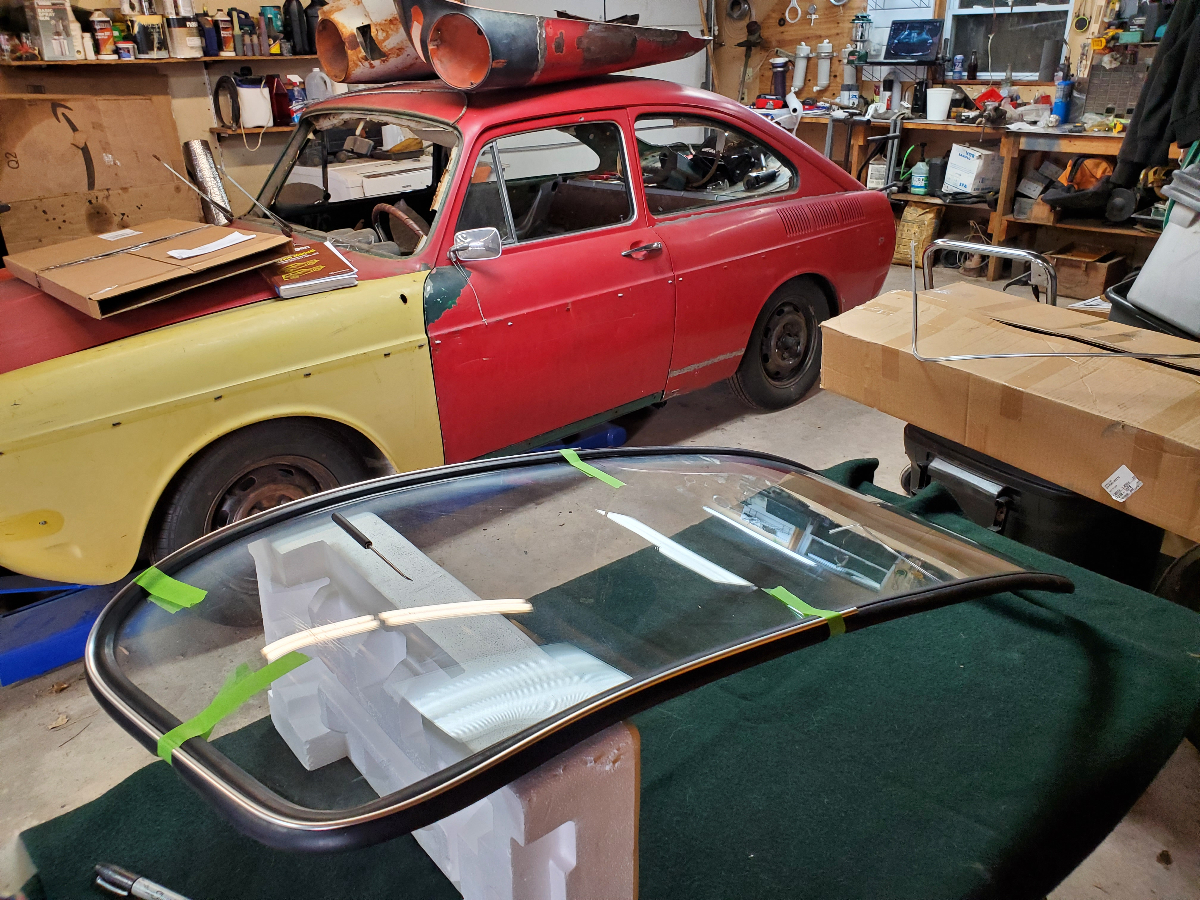 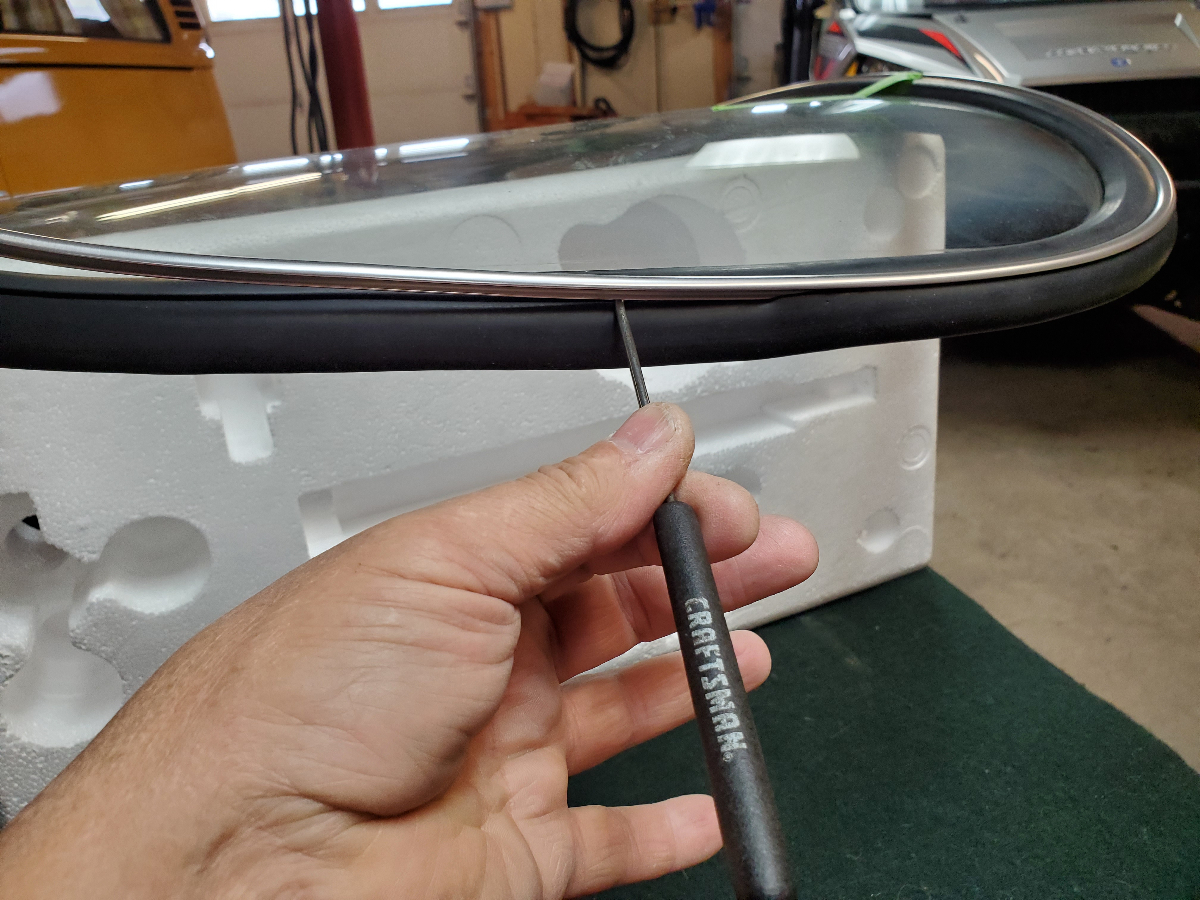 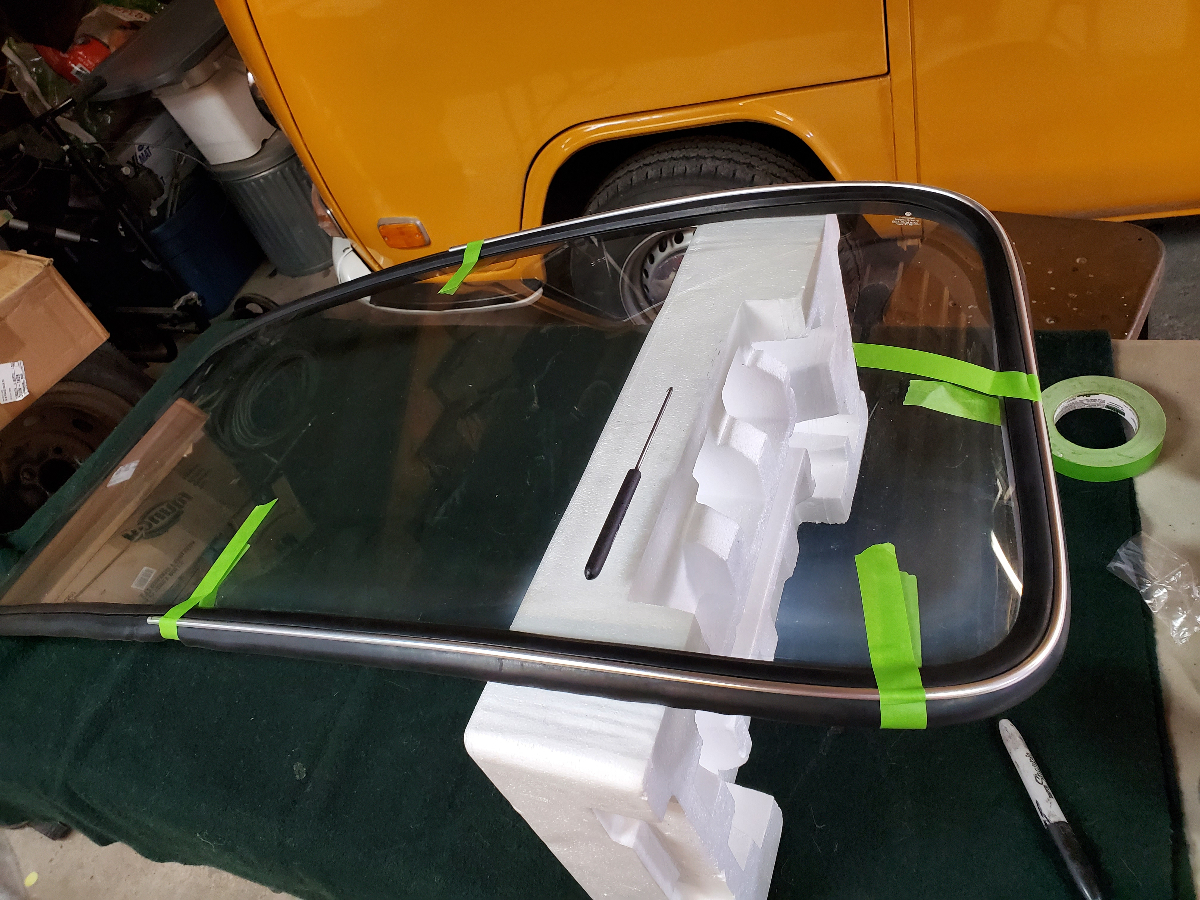 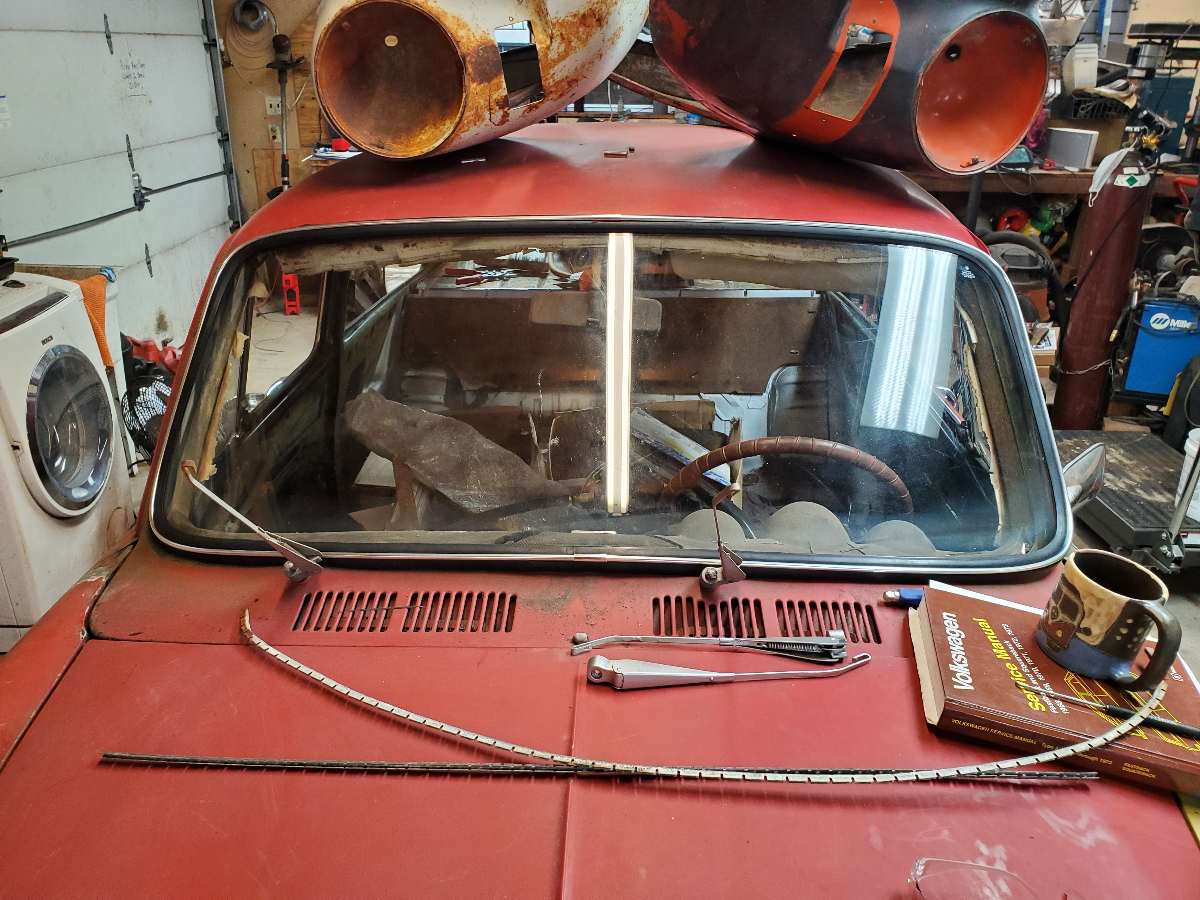 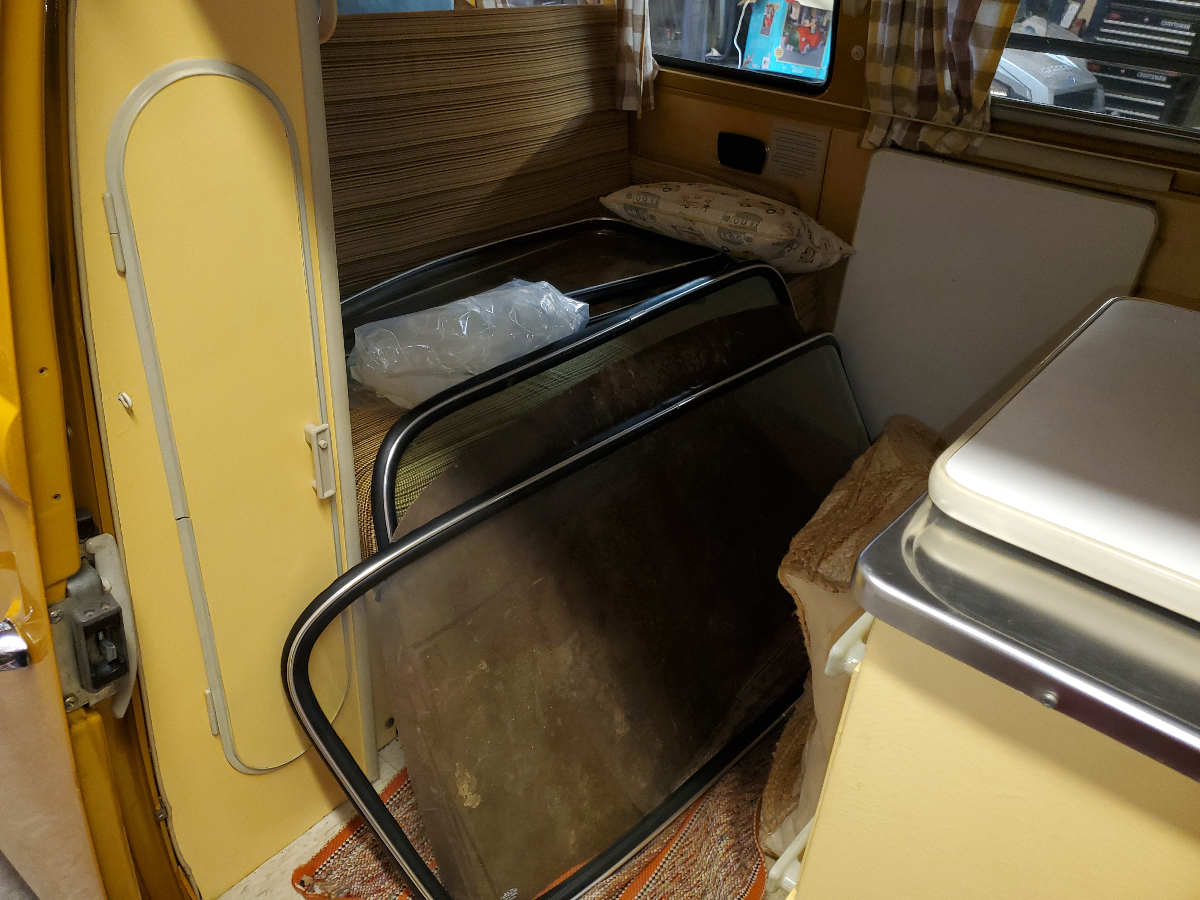 Note that the pick process is less about pulling along the seam, more about joggling the seal to come up over the lip of the chrome. While moving along the seam works as well it is challenging as you are also trying to guide/manipulate the chrome while pulling the pick, my experience was joggling at the intersection point was easier and just as fast. Also it is much easier to elevate the glass on the end you are working on, much better visibility, obvious I suppose.

After much hemming and hawing decided to start the body work process. Never done this before so it is all new. My first attempt on the drivers door, which is by far the worst of the two, required 3 coats as I am skimming the entire panel. I'm still working on it but the results of the sanded first coat are below. Clearly I applied the Rage product unevenly as I have low spots everywhere, only some related to the panel itself. With practice I am sure I will improve my process. Any suggestions? 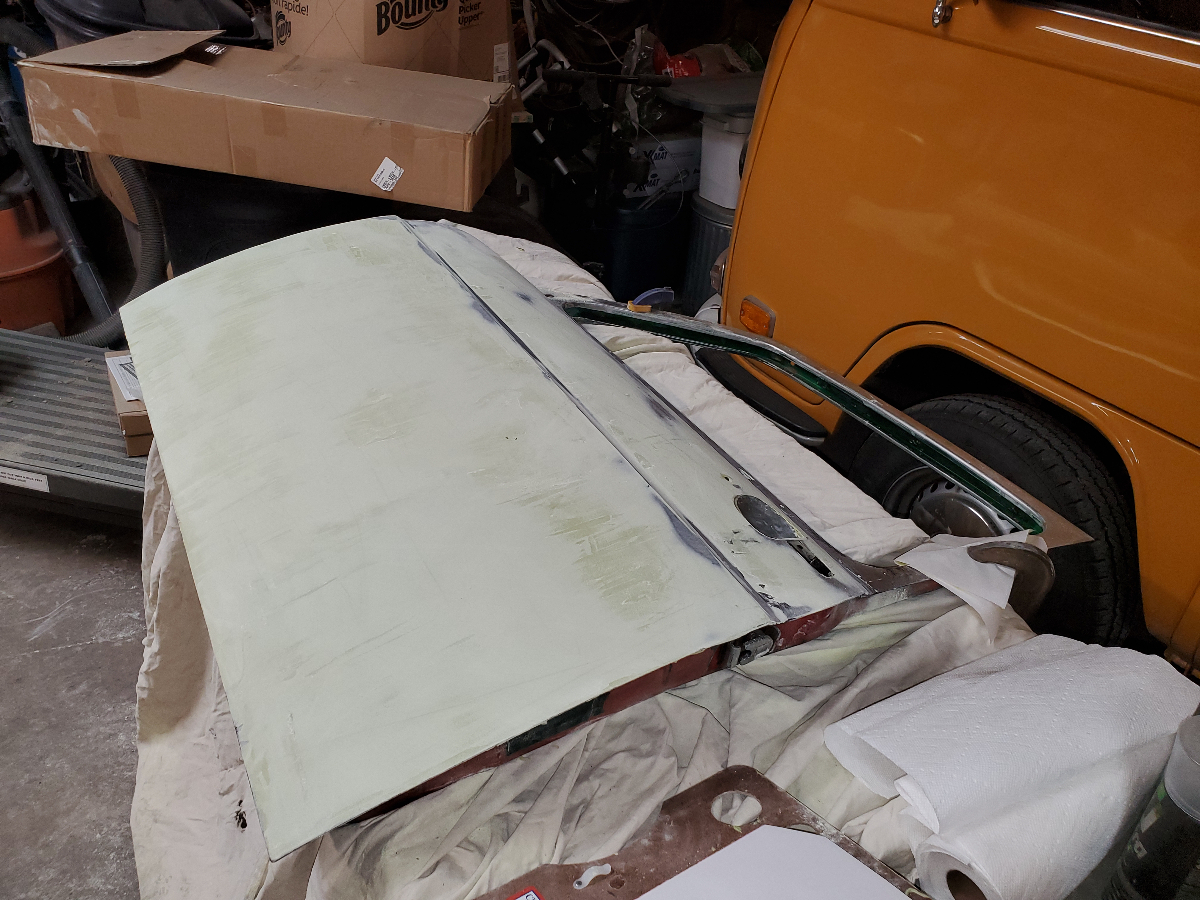 So after removing engines from bugs and buses many, many times, I have determined that the Type III is a breeze comparatively. Finally pulled the engine in an effort to get to the paint prep in the engine bay, wasn't nearly as bad as expected, true for both the engine/transmission removal and the condition of the underneath. Couple of small patches to weld in and moving on with undercoating removal (not a favorite). In the meantime finished the base coat on the interior, not sure if I will finish with Master Series black or paint with the Deep Sea Green (once I find a supplier that is...).

Need to decide what depth to go to on the engine. Since it seemed to run well, with no leaks to be seen, am contemplating simply removing tins (rust removal and paint), making sure all nesting materials are out, checking oil cooler to be sure seals are good, and ensuring that cooling flaps are working properly. Obviously will separate the transmission and check all clutch related items, plate, throw out bearing, front seal, etc.. Thoughts on other steps to take? This may be short sighted but can always pull the engine again if need be. After four years would like to drive this for the first time.

Also noted that the rear engine support bracket was twisted on the drivers side, not sure what the cause was but will have to deal with that as well. I noted in the manual that the support rubbers for this have to be re-centered if removed (I have new ones). How is this accomplished, didn't mention the method. Is it a front to rear centering or side to side, I'm assuming the latter as the engine is positionally locked front to back.
Top

First, as can be seen in the pic the holes in the casting for the oil cooler are two different sizes, as measured. The one on the left is 12mm+, the one on the right is 10mm exactly. Is this normal? If it is normal which oil seals do I use, as the holes on the oil cooler itself are 10 mm as well. The seals that were installed previously were 10mm/8mm but were plastered with some adhesive or sealant in an attempt to make them leak free (which apparently worked as during my short runs saw no leaks).

Also the gasket that was on the top of the oil cooler was in rough shape, what have others used in this location? Can be seen in the picture below:

Again looking for help/input on these two issues, most important is the oil seal issue.
Top

Below you will find a quote from Colin from late 2019, early 2020, regarding my Fasty's inability to maintain idle and rough running. He references the intake plenum, the AAR, various hoses, all as possible air leak locations, but didn't mention the cold start valve. C'mon Colin!!!! To be fair he does say "Look extremely carefully for air leaks!"

After I pulled the engine I began the cleanup and today decided to pull the fore mentioned valve, turns out both screws were extremely loose creating a direct air pathway into the manifold. Since I have never touched this valve, other than to hook up a fuel hose, I can blame it on the PO (thats my story, sticking to it).

You say air leaks cause rich running, I'm surprised it ran at all. Unfortunately won't be able to validate this as the only leak point until engine is back in the car at some date in 2029!

"Rich! I bet you see black smoke when you rev engine and it breaks up.

A very subtle-but-nasty leak point is the intake plenum. It has a cap on the end, with a rubber seal, I think.
Also, make a careful check of the auxiliary air regulator which bolts in at what would be the fuel pump boss on a carbureted engine. No air leaks. All hoses! Especially the plenum-to-manifold sensor hose."
Top

So work continues on the Fastback albeit slowly. I set up a small shot blast booth and cleaned up the engine metal then moved on to taking care of the CV Joints. Unfortunately whoever was in there last used whatever grease they could find, red grease, black grease, only one looked like it had been done correctly. The good news is that the wear was minimal, with shiny spots but nothing as far as depressions or gouges, looked reasonably good, certainly good enough to reuse. Hopefully will finish these up today once the axle epoxy paint has a chance to dry.

A Question, which direction do the concave washers go on? Embarrassing but I didn't pay attention to that detail

Colin, thanks for the reply. After looking at previous wear marks on washers was able to figure it out, at least so I hoped. Good news I guessed correctly, that project is done!

Driving it soon, ha! Thoughts of completing the car quickly after retirement have flown the coop, seemingly busier now than I was when working. My current plan is to begin painting this summer, focusing on the body first then the fenders, hoods, doors, etc. Unfortunately I still have to remove the body to ensure that all rust has been eradicated along the floor pan edges, shouldn't take long to do this but... Any tips on items specific to Type 3s that I should unhook/disassemble before the big split up?
Top

Just realized that I have had this Fastback four years, ouch! Should have been completed during the 3rd year, that was the timing on the other three. Oh well we'll keep plugging along and hopefully be driving a mostly completed car in the spring of '23.
Top

The obligatory pic of shot-blasted, primed and painted engine tin. Some rust pits in the top tins but they cleaned up nicely after blasting, certainly wasn't going to body work them to fill the pits, corrosion protection was the goal. Rust converter as primer, high temperature enamel (3 coats) and clear coat (3 coats), overkill, yup!

Still have to straighten the engine support bar as it has a twist in it but will do that prior to applying paint. Unfortunately too long to fit in my shotblast cabinet.

Engine 95% reassembled, several times over as I forgot things along the way, like the seals for the muffler, getting the metal for the lower tins on the correct side of the upper tins, etc.. Final effort prior to assembly was to shotblast the heat exchangers which was an experience as they filled up the cabinet (sorry forgot to take pictures). They required welding repairs in several areas which led to more weld repairs and more, etc.. Once completed I used the same painting process that I used for the tins, but finished with a high temperature enamel gray vs. the black that I used on everything else.

I also reused the fully intact coverings (insulation I assume, never saw these on beetles) being careful to ensure that I didn't touch them without gloves or work with them without a respirator as I assumed they have asbestos in them. Better safe than sorry. Also fabricated one of the long rectangular pieces that go underneath the heat exchanger as one was missing. Utilized high strength nylon cable wraps to hold everything together as the original metal clamps were shot. Looked like new although the coverings were dirty/stained but they will continue to do their job after 52 years. Obviously couldn't address corrosion on the inside of them but sealed it up and poured rust converter in where I could, probably be burnt away quickly but so be it, had to try.

Won't win any awards but at least everything is protected against corrosion. On to the final body work prior to paint (been saying that for a while).