By the way we had a 3 hour and 22min visit from Colin last night on his way to Miami! we managed to drive a old willys jeep with a meyers hard top that Colin and his baby goat co-pilot worked his way through the 3speed crashbox or syncromesh tranny (the jury is still out over what is in there). We had a messy taco dinner and bid him goodbye into the night! 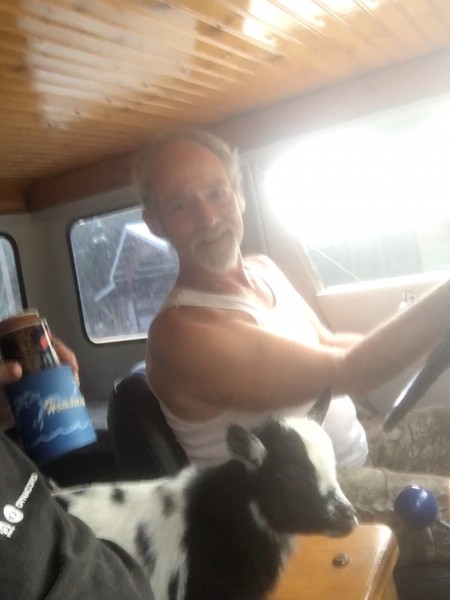 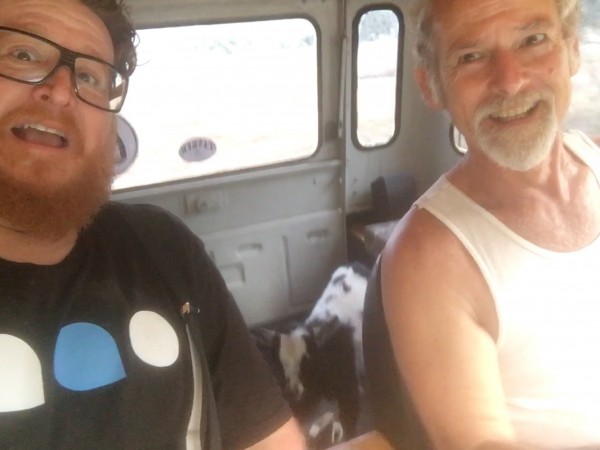 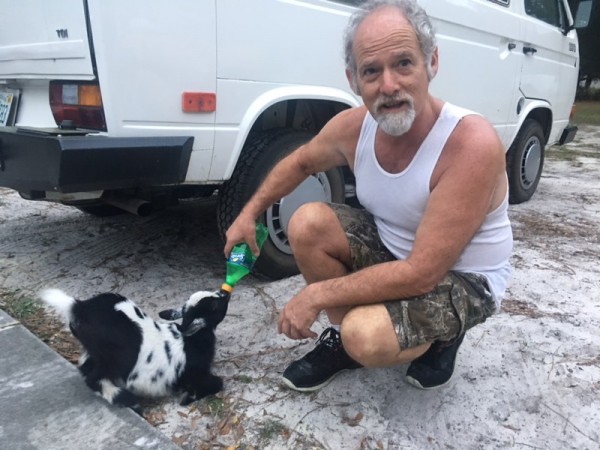 colin feeding little dottie next to the Weisswurst (my name sake)

What a fricken pleasure it was to leap into NaranjaWesty (I checked the oil, I did that) and blast into the foggy night for Miami. The filthy windows grabbed every droplet of fog and ensconsed me in a blindingly chilly damp night of sailing the interstate. "Blindingly"? Yes, blindingly as all of the millions of droplets turned on and off in a stroboscobic sequence under the halogen streetlamps that Florida just has to litter the landscape with at every intersection, rest area, weigh station, and bridge, but it was excellent to be back in an air-cooled Volkswagen.

Drove a foggy four hours to burn off the over-energy from drawing maniacally to get the Dakota Beige Westy sticker completed, and to tire out my anxiety at the serious engine surgery that awaited. Conked out in a rest area and awoke in a fog, that same fog from the night before. Yeah, but a Maringelb Westy still manages to cheer the place up:

Trotted like a gimpy cow around the rest area and hit the road to Panera for coffee and final confirmation that Dakota Beige Sticker was ready for printing. Forgot that people spontaneously come up to talk about their old Volkswagens:

Pulled off at the very wildlife refuge where I restored NaranjaWesty's vent window, but today was just to get in a quick shave and another wobbly walk/trot to loosen up my seized joints in the 82* afternoon, yes:

Oh, I did a repair even though I was past due to arrive at Homosassa to see the Weisswurst Baby Goat Big Pig Proud Rooster Menagerie. I replaced the engine hatch seal, the first new seal on this car:

It is always a pleasure to see Weisswurst and family and my animal pals who hosted the first days of getting NaranjaWesty in shape:

This little creature was rejected by her goat family/goat peer group, and had to befriend the people of the farm to fill her days. Dottie is her name, and she loves to be held and to follow us around the farm:

Farmer Weisswurst and his blushing bride in front of the BIG Ford:

Well, you can take the farmer out of Hollywood, but can you take the Hollywood out of the farmer? LOOK at this swank set-up that has sprouted where cooped chickens once roosted . . . :

Bob The Goat and his concubine Mrs. Goat, I photographed at my exhaust refurbishment visit in December 2015 or the windshield channel visit in winter 2016, I cannot remember which, but here we are in 2019:

One of my piglet pals from December 2015, such a big handsome pig now:

Then I got to do my annual Drive The Fleet. This is the Jeep that Weisswurst's lucky kid gets to drive:

The namesake diesel Vanagon, Weisswurst, from the driver's seat:

I always miss my Vanagon after driving a Vanagon. We had an excellent dinner as usual, then I took my leave to get to Miami:

Miami, where serious engine surgery on a bus named "Sunshine" awaited, as did a mystery bucking that had plagued "Valentina" exoticdvm's Westy for far too long on their trip back from Alaska. I felt the pressure building. But Miami decided to toy with me by presenting yet another deluxe traffic jam, this one not even on a Friday afternoon. Rain had incessantly drummed down on poor NaranjaWesty all the way across the Big Cypress Swamp, and it ceaselessly dumped incessantly on all of us sodden suckers stuck on the slick Palmetto Parkway. I wasn't having any of it. Crabbily, I crankily caught this BMW in my withering wet disdain:

You call that a BMW? I call it a failed stylin' cuz we hip monstrosity from their southern California design studio.

starting early this year!! Maybe i should get a goat. looking forward to your write up on those other two busses! 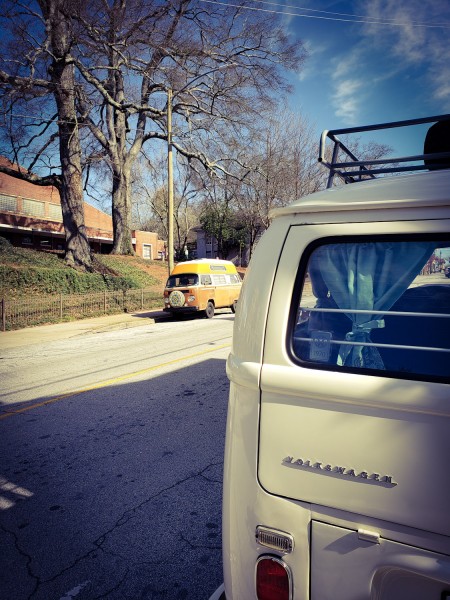 I just reclaimed mine from my son yesterday :)
60 beetle
78 bus
Top

Amskeptic wrote:Well, you can take the farmer out of Hollywood, but can you take the Hollywood out of the farmer? LOOK at this swank set-up that has sprouted where cooped chickens once roosted . . . :

well, something new just sprouted out of the dirt here (or was dragged in on my trailer this weekend)
We literally saved it from being crushed in a car crusher at a local junkyard, (can't even imagine how it ended up there!)

its yellow and a diesel too! 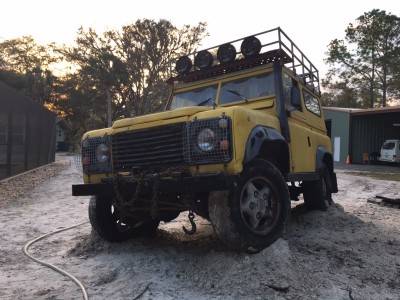 Amskeptic wrote:Well, you can take the farmer out of Hollywood, but can you take the Hollywood out of the farmer? LOOK at this swank set-up that has sprouted where cooped chickens once roosted . . . :

well, something new just sprouted out of the dirt here (or was dragged in on my trailer this weekend)
We literally saved it from being crushed in a car crusher at a local junkyard, (can't even imagine how it ended up there!)

its yellow and a diesel too!

Oh good grief. What is it? Glad you saved it.

Is that a 90? What on earth was that doing at the car crusher? A good friend had one with 2.5 liter n/a Diesel engine. It accepted vegetable oil without much complaint. Have fun with it's appalling turning circle!
Top

it does have the 4 cyl diesel NA non turbo engine and all the stuff seems to be there to get it going again.
the quick story is: I was asked to got look at a car with a friend and we went with a trailer trusting it was what the seller said it was and it was NOT even close to "as described" and had massive title issues so we left with an empty trailer and wasted 100 bucks of diesel as well. The friend saw I was annoyed and suggested a stop at a newer junkyard that has newer cars that opened up a few years ago (he had been meaning to visit it and had not).
I walked around still annoyed with the deal that didn't go well and looked up after avoiding a big mud puddle in my path and lo and behold there was a plucky yellow little Landy with no tires and rims saying "SAVE ME!" 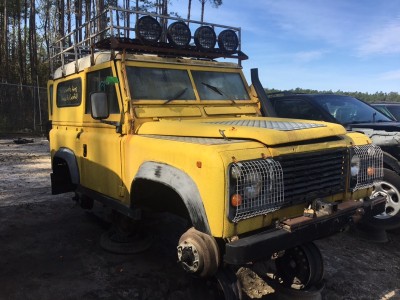 I quickly text a pic to my buddy who is not with me (all the way across the yard of mud and wrecked cars) and he texts back this "STOP sending me pics you got off the internet to make me think something of that caliber would be in this yard"
I choose not to respond and start talking to some middle manager types discussing what areas to add dirt to fix all the mud in the isles, I say "are you guys in sales as I would like to buy a whole car over there if you would care to sell it"
they reply, "we don't sell whole cars this is a parts yard fella"
A few mins later we agree on a pittance for the whole lock stock and barrel (really nothing missing from the car but wheels BTW
I quickly get him to agree if I can find some wheels and tires that fit he needs to throw them in for a safe transport and he agrees and says good luck that bolt pattern is huge I know we wont have those!

I wait for them to go into a meeting he mentioned they had and grabbed the next guy on a fork lift to find a LR discovery
(my buddy and I noticed a nice set of spacers already installed that would make it fit LR Disco wheels)
we put a 10 dollar bounty on the wheels and 5 guys find one and bring em down and they grab it on the fork lift (whoa!) 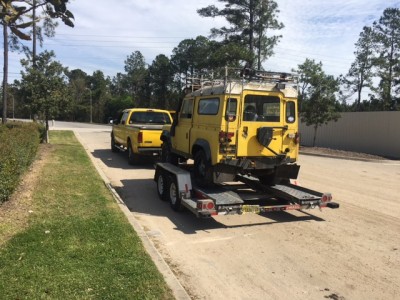 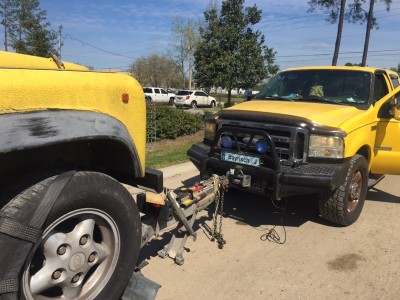 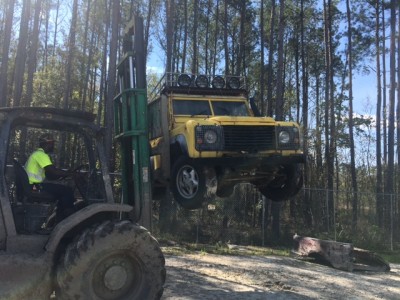 That's a great story. Now to be pedantic! They are generically and affectionately known as Landys in their homeland. Rovers were just that - including the rather rakish P5.:

Have fun in the mud!
Top

tommu wrote: ↑
Tue Mar 12, 2019 10:34 pm
That's a great story. Now to be pedantic! They are generically and affectionately known as Landys in their homeland. Rovers were just that - including the rather rakish P5.:

Have fun in the mud!

looked it up and you are right! the rovers were cars and I should have used the nickname Landy!

I have now edited the post accordingly :) my diesel mechanic friend (originally from Argentina) is coming up with his kids from Miami this weekend for my son's birthday and we plan on getting into it the engine bits on Saturday to see if she will fire up.
you may remember the diesel Doka he rebuilt for me
viewtopic.php?f=3&t=11831&start=15

also Colin enjoyed driving us kids around for a parts run in it!
viewtopic.php?f=68&t=12029

Also he has the ability to do a "mechanics lein" so looks like a could get a title for it too with him!
might not be "yard art" for long...