I'm pretty sure that Colin will do an in depth Itinerant report on our poptop adventure at some point, but I couldn't resist posting a couple of appetizers. What fun we had! 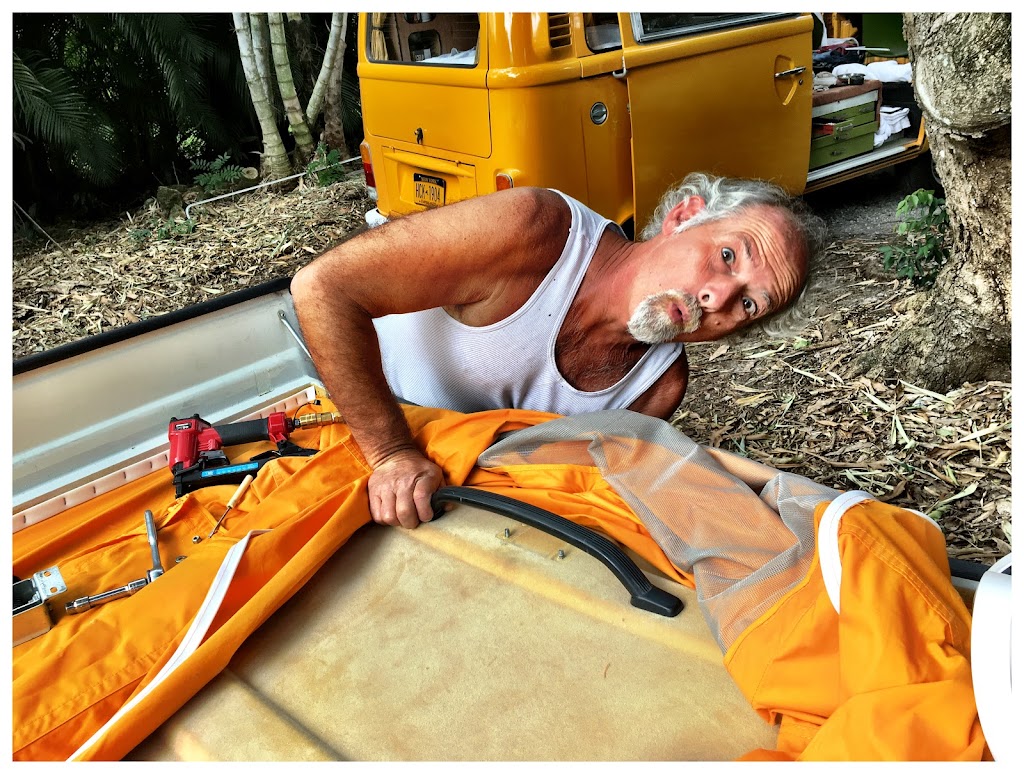 "Lucky" you two! I guess after a solo headliner install, a pop-top canvas doesn't seem so bad…

.. .. .. but I have determined that it is too unruly to focus in that house. Handed over the keys of my beloved Lexus to my brother and I wished/wish him the best.

I will keep you apprised of my possible move to Pensacola FL to stay at the home of a pilot who flies all over the world all of the time. I will overhaul Chloe's engine at my favorite jackstar garage aka Clint Eastwood Meets Atticus Finch Law Firm, if this option opens up.

Anyways, I threw a bunch of stuff in Naranja, and beat it out of there on January 17th never to return. I was unable to focus for almost a week. Skipped a visit with weisswurst and stuartfrickfoose and endeavored to find peace in the middle of deep fatigue and discouragement. Found it, too.

My God, what a pleasure to be with a nice genuine sane rational human creature who was the epitome of hospitality. I made sure to test it most sorely the very next day . . . by the simple request to replace my poptop canvas:

There were staples, I remember:

There was the on-the-fly lasso the spring-loaded supports at the mid-removal point using the parachute cord normally pressed into service installing windshields. Did it slip up the aluminum support tube and catapult the bracket into the All Important Fuzz lining the inside of the poptop? Why, yes:

Though it was a Learn As You Go project, I was expecting to execute a near-perfect replacement. I have attention-to-detail, you see:

Jivermo was embarrassingly helpful and solicitous, going so far as to procure a pneumatic stapler:

It was after we had laboriously placed and bolted the fiberglass top back on the bus that it became apparent that the canvas was inside out. The screens, you see, were facing in. One of them, in fact, caught on a little weld slag sticking out of the support and ripped the sh*t out of itself as I opened the top. Jivermo said,
"Let's knock off."
I said, "sure".

May I ask which canvas you purchased? Ok.
Which canvas did you go with? There seem to be a few choices.
The duct tape on mine is failing...it is time.
Top

This is the Bus Depot "as good as German at half the price" canvas. I question my capabilities before I question its dimensions, but there have been some occasions where people kick up a fuss for having too tight of a fit. I am complaining, myself, that there is no room to get a screwdriver in the corners with this new canvas, but I am pretty sure that I did not pull half so heftily as I should have to allow the canvas not to be pulling over the frame like the skin on an egyptian mummy.

It really was a gut-punch to realize that the whooooooooole operation had to be done again. Fortunately, the next day rained and rained. We decided to do the Sequoia's front ball joints under the canopy in the rain:

Yeah, Itinerant Air-Cooled does do Toyotas and Lexii, don't tell anyone just yet. Ball joint job was quite simple, but the reason we had to do it was quite disturbing. Apparently Toyota's vaunted quality control has gone to hell (making me miss the vanguard of quality as represented in my 1992 ex-Lexus) and these 4-Runners and Sequoias have been dropping front wheels all over the place due to ball joint failure. I remember 70's Ford station wagons doing that, but not a 2000's Toyota?

Day Three at the Jivermo Compound was Poptop Canvas 2.0:

Undid all the little screws. Tied down the support hinges, removed the poptop with the assistance of his neighbor, and set to work removing hundreds of staples firmly seated by pneumatic assist. This stuff happens in life, doesn't it?

We flipped the canvas over in-to-out then flipped it. Voila, screens on the outside. Sewed 70 screen squares back together, then another 80 down the other side. We have a Chevron/Nike logo deal going on with the left side screen now.

Jivermo and I were pretty frosted by the end of Day Three of screwing around with Toyotas and Volkswagens. It was dusk, and I had:
a) installed the canvas inside-out (day one)
b) lost another fight with the water hose (day two)
c) riIIIPPPPEEDDDD the new l/s window screen (day three)
d) CUT THROUGH THE PLASTIC BEADING INTO THE CANVAS AT THE LEFT REAR CORNER (evening three)

e) lost my light as I was desperately trying to align tiny little screws against the tight canvas and screw them through the aluminum trim/plastic beading/tight canvas into the thoroughly invisible holes in the roof.

I sent Jivermo and his wife out into the night AGAIN to enjoy an out-to-dinner ALL ALONE while I battled and cursed tiny little screws and cut fingers and chewed up mini-phillips screwdrivers. I did give up with four screws yet to go. That was actually mentally healthy. My God the car was a mess inside, footprints on the counter?? back killing me, fingers all arthriticky, and guess what? I had a job in the morning, 9:00AM sharp. What job, you ask?

. . . and you can see clearly right here that we best get the job done, and get it done well:

So, we did what we could to remove the engine with a complex series of jack n blocks n green buckets, clean up the oil, remove the pressure plate and clutch disk, measure the end play, remove the flywheel, the seal, the shims, measure the shims, add .002" thicker shims, replace the seal, note that the seal we removed did not seem to be passing oil, noted with real alarm that the right side gallery plug had orange rtv slathered on it (!) filed and JB Welded all gallery plugs, slapped the flywheel back on, and the clutch disk and the pressure plate

and reinstalled the engine with a complex series of jack n blocks and kicking green buckets, reinstalled hoses and wires and bumpers, and that car did start and it did not leak. This here is what the halfway point looks like . . .

No instructions; nary a word. Not even..."make certain that the screens will be facing the OUTSIDE of the canvas when you begin stapling it to the top!" Hey! That would have been nice. Bus Depot, you guys need to develop an instructional page.
Top

Makes me feel a little better that someone else had a surprise once they looked upon their newly installed canvas. Mine looks fine from the outside, but it's upside down. The windows are a little high and the zip out canvas blocks the screen unless we tape it up or something.

I am guessing if it was installed correctly, the canvas would drape down below the windows instead of covering them up, and I wouldn't have to get up on my knees to see outside. No view or air. Good grief!

Cheers to you my friends, who have ever had a rough day working on their bus.

tnjed wrote:Makes me feel a little better that someone else had a surprise once they looked upon their newly installed canvas. Mine looks fine from the outside, but it's upside down. The windows are a little high and the zip out canvas blocks the screen unless we tape it up or something.

I am guessing if it was installed correctly, the canvas would drape down below the windows instead of covering them up, and I wouldn't have to get up on my knees to see outside. No view or air. Good grief!

Cheers to you my friends, who have ever had a rough day working on their bus.

If it was easy; everyone would be doing it.