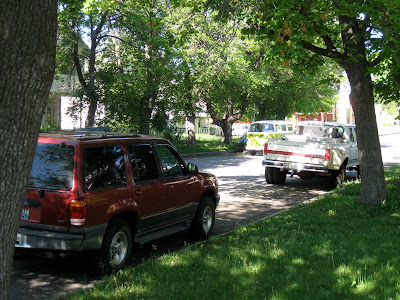 I wanted a better picture of his arrival but he caught me off-guard by coming in from a non-standard direction. 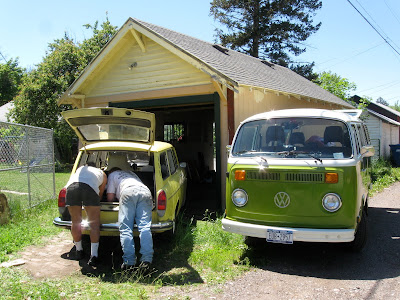 I was so ready to be proud at how I'd cleaned and organized the garage, but since it was a ghastly 80F and achingly sunny, Colin preferred that we stay outdoors and work on our melanomas. Ludwig's engine still being in the hands of one Rocky Jennings of Walla Walla, we set to work on Gertrude. There was all that trouble with the fuel hose, and when she finally just wouldn't start a few weeks ago, I assumed it was a fuel starvation issue. Nope. Colin tracked it down in about 40 seconds to poorly adjusted points, and she was running. A diagnostician I ain't. 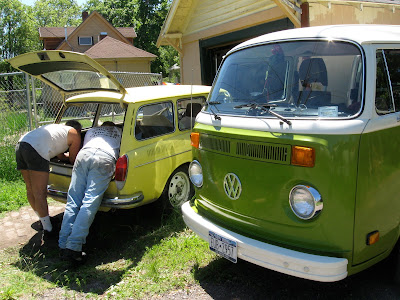 But she still wasn't running quite right--lots of stumbling at the demand for power; running very rich--so we tore tore tore in and got very intimate with Bosch D-Jetronic fuel injection. 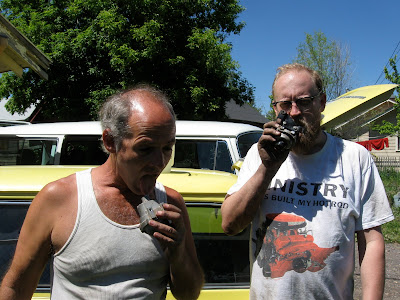 This isn't screwing around, it's how the Bentley says you're supposed to test a manifold pressure sensor for vaccuum. Note my serious face. 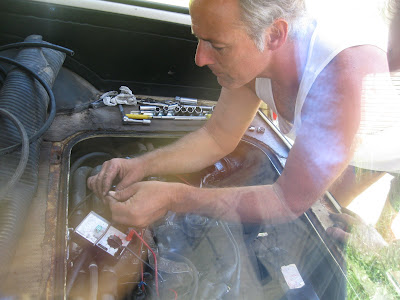 There was a lot of multimeter action which I was glad to take part in because we fuelie owners especially need to know how to run these things. At one point Colin said something about his disappointment at having brought zero expertise to the situation. Uh, what? The car runs better than it ever has since we've owned it. Colin left at about 830pm with a word to try a cold start in the morning. If the start was good, he'd be on his way. If it was bad, he'd come back that afternoon.

Re: amskeptic in sunny! Missoula Montana

whc03grady wrote:
This isn't screwing around, it's how the Bentley says you're supposed to test a manifold pressure sensor for vaccuum. Note my serious face.

heehee...Now I don't feel so bad standing in the store blowing into oil filters before I buy them to make sure the anti-drainback valve is sealing.
Top

Some kinda high-tech internet-enabled minibongs.
"This war will pay for itself."
Paul Wolfowitz, speaking of Iraq.
Top

If I ever get off this infernal dial-up, maybe I can post pictures too.
I cannot even see your pictures right now.
Later, when I get back to civilization . . .

It was a relief and a joy to see Melissa tool up in the Squareback while I was at Chris's house working on his Champagne Edition '78 sunroof bus.
The guy doesn't realize that it is a worthy princess (he is using it as a truck).

Glad that you boys straightened out the squareback, but it's too bad you couldn't have also gotten Ludwig closer to being back on the road. What tipped off Colin to check the points? You thought that it was fuel related, didntya?

So are you tenting in Maupin?
1975 Riviera we call "Spider-Man"
Top

BellePlaine wrote:Glad that you boys straightened out the squareback, but it's too bad you couldn't have also gotten Ludwig closer to being back on the road. What tipped off Colin to check the points? You thought that it was fuel related, didntya?

So are you tenting in Maupin?

I think the orange bus is in heat like a cat...
http://greencascadia.blogspot.com
http://pdxvolksfolks.blogspot.com
it balances on your head just like a mattress balances on a bottle of wine
your brand new leopard skin pillbox hat
Top

Awhile ago we started a thing where before dinner each of us (Melissa, Esmé, and I) say something we're thankful for. Ever since the first time we did this, Esmé has said she's thankful "for the trees come", i.e., for the return of spring.

The night that Colin was here, she said she was thankful "Colin help Daddy fix Ludwig [sic]."

it appears to be engine-less. (yes, both from the photo and the OP)
1979 California Transporter
Top

airkooledchris wrote:it appears to be engine-less.

It says in the Bentley, that if you remove the bumper the butt will raise up.