Do you have a difficult-to-move handle on your post '73 bus?

Did you know that the resistance you experience is actually a coiled-up spring installed precisely to give you thatr resistance? Who wudda thunk?

Step 1) Remove Door Panel.
Start at a healthy section and pull out as close to a determined clip location as possible.
Before proceeding, please re-glue the entire perimeter of the vinyl to the masonite panel. I'll wait here . . . . .

Step 2) Release Cable and Return Spring Anchor
Remove C clip from cable end in front latch. Gently pull cable sheath out of plastic retainer midway. If retainer is broken, procure a wire tie for reassembly. There should be a foam block at the middle point, and at the forward third of the cable sheath. If yours are damaged or missing, cut a couple of 2" blocks out of the mattress in the guest bedroom.
Release cable end from forward latch assembly. There is a preload so don't freak if the latch actuator springs away a bit. Loosen the 10mm locknut that holds the cable sheath to the latch bracket. Do not disturb the adjustment if your door has been working correctly.

Step 3) Remove Latch Assembly From Door
Push the coiled up spring swaddled in foam towards the front of the car so you can remove the anchor rod from the sliding door inner frame. Let spring lay down slowly. Remove the cabin-facing phillips screw in the rear latch. Now open the door halfway and loosen the outer phillips screws while supporting the assembly.

Once the screws are out, you can withdraw the latch assembly and dangling spring and cable to the rear. See how simple this stuff is?

Step 4) Lubricate & Clean
You want to reapply grease to cleaned parts, and then blast the grease into hard-to-reach areas with some aerosol like WD-40. I slathered 80-90 gear oil on the greasy mess and let it work into the actual latch as it goes through the body of the assembly, and I slowly introduced gear oil into the cable sheath so it could run down the length of the cable. Every contact point that you see wants grease, full-strength. The spring in foam on the BobD was dry, unlike most torsion springs, but I kept it dry. I assume it is to keep the foam healthy. Actuate the levers and catches and get the lubrication where it needs to go. Now wipe it down clean clean clean on all interior facing surfaces, and mop up all drips everywhere:

Step 5) Reassembly
Wax the door's paint under the latch assembly and along the perimeter where the clips go in. Do all exposed painted surfaces if you care about your bus AT ALL.
Now re-install rear latch taking care to negotiate the foam swaddled spring and cable through the skinny space between the door and the body. Start the rear screws to barely snug, go around and get the cabin facing screw started to barely snug. Completely tighten the rear screws, then the cabin screw. This rigamorale is to make sure the latch is non-stressed and aligned before clamping the door. Pull the torsion spring with the anchor rod towards the front and insert the anchor rod into the hole in the door frame.

Step 6) Detour Diasassembly
I decided to do the front latch assembly as well. There is a plastic cover with three little screws at the bottom edge of the sliding door glass that allows you to remove the three phillips screws that hold the open door catch. Then you can release the catch from the pull rod coming directly up from the front latch assembly. Remove both door handles and the outer plastic grommet. Remove three phillips screws, and lower the assembly down and out to let that pull rod get free of the door and the assembly is in your hand. Harder to lubricate this assembly with the rivets holding it together, so I did a gear oil baptism after a pathetic effort at poking grease in every available spot. Again, work the grease and oil into the works while it is in your hand at angles it will never see again.
Wipe it clean of oil/grease drool. Check that the lock cylinder is secured snugly with that single phillips screw attaching it to the body of the latch assembly. Reinsert the pull rod in the door leading up to the catch and get the latch assembly in position. Re-insert the three phillips screws that hold the assembly to the door, but do not tighten until you have the outer door handle/grommet installed, they serve to pilot the whole assembly. By the way, a Type 4 pushrod tube seal serves as an excellent replacement for the felt that is supposed to reside between the plastic grommet and the outer door handle. A half turn of electrical tape on the outer perimeter of the plastic grommet will help it seat more securely in the door opening. And a wrap of HVAC aluminum tape on the door handle shaft itself (adjust-to-fit by hacking off at 1" intervals until it slips into the grommet (use Valvoline DuraBlend grease on last insertion) will give you a nice smooth tight door handle action. Reinstall the cable sheath into the bracket, and pull lever towards cable eye until it slips on + circlip. Tighten your 10mm locknut, and place foam blocks where they will serve best to prevent rattles. If your cable is all out of adjustment, there is a little hole in the rear latch assembly where you insert a 4mm allen wrench or screw to hold the rear lever into position while taking up the slack in the cable with the adjustment turn buckle where the 10mm locknut resides. This is true for the earlier latch assemblies too, you just have to scare up more 4mm allen wrenches or screws since they use two rods, or one rod and one cable. Everything gets adjusted to just barely snuggish. The door should open at 1 3/4" movement of the handle.

Just got done replacing the broken front latch on my '78 which Colin had pointed out on his recent visit here. Found one on the Samba, and installed it today. Did the Colin lube job on the entire works...the mechanism in these doors is a work of art! Love it.
Top

Jivermo wrote:Just got done replacing the broken front latch on my '78 which Colin had pointed out on his recent visit here. Found one on the Samba, and installed it today. Did the Colin lube job on the entire works...the mechanism in these doors is a work of art! Love it.

Actually...the actuation feels about the same...but the gliding is oh so smooth.
Top

Now, Haynes says remove this screw to take cover off. My bus, Cikan Vuz obviously never read the book or it was lost in translation cos taking the screw out did NADA: the cover would NOT come off, not matter what I pried and/or tried.

regardless, I got the old broken assembly out and new one in by manhandling the cover so the slider parts went where they go and then putting the spring assembly into the door, tightening it down and praying for the best.

I got lucky and for once since I owed her, she sprang to life on the down-push of the handle AND closing her was of no effort either.

Thank you Mikel aka vintageaircooled@yahoo.com for selling me a good used part; THANK YOU Amskeptic, for given the guidance herein to help the lost in such a task.

(Now if I could just figure out how to make the Lock lever work on the inside of the slider door: no key and inside lever wont move for me)
Top

Problem: I did the complete sliding door refresh on my '78 Westy but I still need to slam the hinge side of the door to close it.

Description: The door pops open and glides with ease; as for closing - not so much.
I adjusted the cable while lining up the holes in the center latch and inserting a 4mm bolt. On the remote control side, I found that the cable end has to travel the full length of the slider in order to unlatch. Which means that the handle has to travel almost all the way down, way past the Bentley specs. There is significant resistance in the handle, a small child will probably not be able to open the door. Also, while the door was off, I tried closing the center latch "beak" by hand, but it's only possible if I simultaneously press on the handle.

Still have to slam, and impossible to close from inside (I do not have the dummy handle, with it I probably could slam it)

ohiowesty wrote:Problem: I did the complete sliding door refresh on my '78 Westy but I still need to slam the hinge side of the door to close it.

Description: The door pops open and glides with ease; as for closing - not so much.

Still have to slam, and impossible to close from inside (I do not have the dummy handle, with it I probably could slam it)

Have you executed all of the steps in the below article?

Thank you for the prompt reply.
The U hinge is properly refreshed, ports oiled, works very well. To answer your other questions:
a) the perimeter of the door opening for an out-of-place seal that is not firmly seated in it's channel
The seal is old and damaged in some areas. There is some seal resistance by the front vertical section.
b) a rear latch striker plate that is adjusted too far in
I just played with it. Adjusted in, out, middle, slanted both ways. The best results are for all the way in and all the way up.
c) any deviations in the closed door gap inside the body opening which you would tell me here and now.
I noticed that there is no shim at the bottom of the door. The front looks slightly dropped (1/4 ", see pic) but strangely the vertical gaps are parallel. If I raise the front with a shim, the door may touch the front pillar.
Another thing: the rear vertical gap is considerably larger than the front one (1/4" vs 1/8"). I tried moving the retainer further back, for the door to close earlier and reduce the rear gap, but I don't have much leeway. 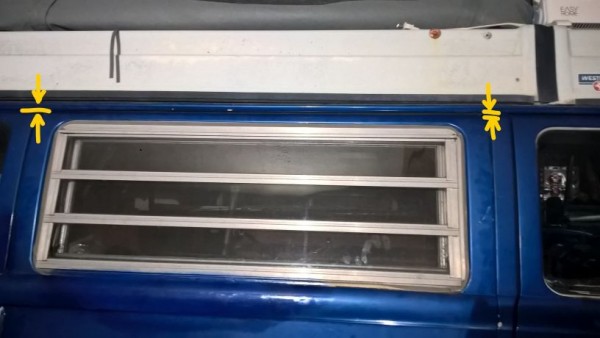 Another picture of the small front vertical gap, and misalignment of curved areas. The rear lines up properly. 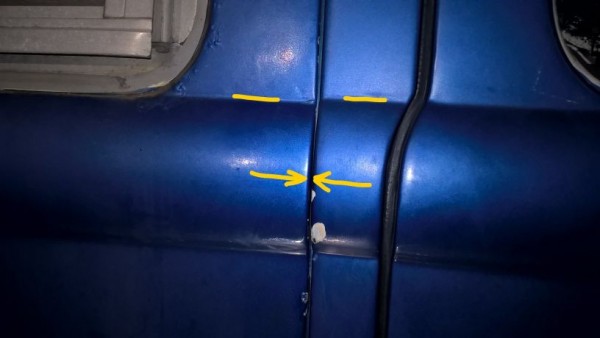 "Goin' where the climate suits my clothes"
Top

That is a fine mess. Adjust the rear hinge assembly where it bolts to the rear of the sliding door (four 10mm bolts)
With all four bolts loose, you need to shimmy/tap the hinge assembly as far forward into the door as possible AND lift the door firmly to get them all to slide in their holes so as to LIFT the rear of the door a bit. THEN you can add another shim or two to the front roller bracket. Remember to loosen the vertical screws at the upper roller bracket so the door can move upwards during adjustment process. Upper roller is to clear the ceiling of its track by no more than 2mm.
In/out adjustment at the upper roller needs to be ascertained with a closed door, then adjusted with the 13mm bolt holding the roller itself. Roller outbound in the elongated slot makes door tuck in, roller inbound makes the door stick more out.
If you can't get relief, let me know.
Colin
BobD - 78 Bus . . . 112,660 miles
Chloe - 70 bus . . . 206,845 miles
Naranja - 77 Westy . . . 129,490 miles
Pluck - 1973 Squareback . . . . . . 55,570 miles
Alexus - 91 Lexus LS400 . . . 94,225 miles
Top
Post Reply
11 posts • Page 1 of 1